Reading between the lines...

About two weeks ago I went to a book club meeting. A very dear friend (and fellow lover of books) is trying to get some momentum built up for the group, and that particular night, having been planned well in advance, I felt terrible. Insomnia, stress, stomach issues--psychosomatic or real, meant I felt like crud. I rallied, and told CD Rogue if I begged off from this my friend would probably stop asking me to do things. (She thinks I play too much WoW, and live in a fantasy world, and has made it one of her unspoken projects to get me out.) Anyway, I read the book, and even though it wasn't my usual genre (schmaltzy romance), it sucked me in and I cried like only a really good chick-flick can do, such as Terms of Endearment or Steel Magnolias can.

The book was Me Before You by Jojo Moyes, and on many occasions while reading I thought about Erinys and the Godmother, being that the author is British, and so are they, and the number of pop culture references and phrasings that went over my arrogant Yank head. Those allusions and references didn't detract from my enjoyment of the book and the good cry it provided. My friend was attempting to bring together five women who had never met, and she was truly an ambassador of the group, and if I have any criticism she was too fast to give others details about ourselves: as I was taking a breath to ask another a question or offer personal information, she would fill in the spaces. Her sister, a very nice person, spent about twenty minutes (I think it was longer, but perhaps shorter) talking about local soccer clubs, coaches, and teams of the under-12 set. There was no fork to stab myself in the eye, so I smiled politely. My friend gave me the honor of choosing our next book, and as I joked that no one else in the group was a gamer/rocker mom (which I am) then we wouldn't be reading Ready Player One, recommended to me by another gamer/rocker mom. They shook their heads in mild bemusement: no, soccer moms here. I did offer the possibility of Bad Mother by Ayelet Waldman, but confessed it might be too much for them. So, I stuck with my first choice of The Valley of Amazement by Amy Tan. Without giving anything away, I believe an alternate title could be, "How to be an Early 19th Century Courtesan in Transitional China." Nasty syphilis? Unwanted pregnancy? E-Role playing, 1912 Shanghai style? Sure. Not sure what the lovely book group ladies are going to say about this one. 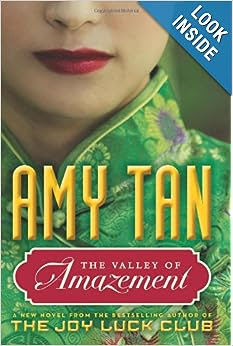 So, I'm in Texas now. Last night my folks took me for dinner after the airport. An odd thing happened: I had my dad pick up the wrong bag, and we had to drive back to the airport to exchange it. It was identical, down to the color of the ribbon. If I had been the one to get it off the carousel, I would have noticed the wrong name. It was a comedy of errors, but the owner of the proper bag was not amused. Oh well. Anyway, so we're at dinner, and my dad orders chicken-fried steak. The waiter, a cute red-headed young man, asks my dad if he wants BROWN OR CREAM GRAVY!!!!??

What is the problem, Matty?

Well, we're in Texas. You never, ever put brown gravy on chicken-fried steak. He humbly offered that his gaff was due to him not being from Texas.

"Where are you from?"

Oh - I know a lot of my friends who play WoW with me from Sydney...

Later he told me he plays LoL competitively, and knows friends who met via LoL and are now married!

And now he knows about brown gravy.


So, how do we get to know one another, the culture of our guilds, and the norms of play, in real and in our virtual worlds? Recently Navi posted her thoughts and analysis on guilds and raiding teams. These responsibilities require a lot of work and thought. We know this from our work lives, we know this from our relationships, and we know this from our time spent with Sydney waiters in small towns in Texas. The key is communication and expectation management: none of us are going to get what we want all the time, but hopefully we get what we need. I don't really know what place I have in Reloaded right now, and I sure as hell have been in a sick tailspin at work. It's nothing bad or evil - change is painful. Even when we speak our expectations and goals, it doesn't mean anyone gives a sh*t. We all hear that axiom to row the boat together, but man, what if you get on the wrong boat? (I could extend this cliche metaphor for days, so I'll stop now.)

Anyway, I have a fun week planned. Brought a lot of work with me my dad said he'd help with, and I'll take him up on it. We will be going to lunch soon, and I think I'll have the chicken fried steak. Cream gravy, of course. It's only right.


*Mr. Snerguls here: Matty woke up in the middle of the night and thought, that's not right, and then Dahahka noticed it too: brown gravy is for biscuits and gravy, red-eye gravy, too. but white cream gravy is made for battered foods such as chicken-fried steak.