Day 24: In the background

I did not intend for this series to be a pictorial of Kellaen, however, when one is starting fresh, there are some old things to see with new eyes.

James Clark is a petty thief and outlaw one must efficiently dispatch of.  And, separate him from his noggin. He wasn't using it anyway. 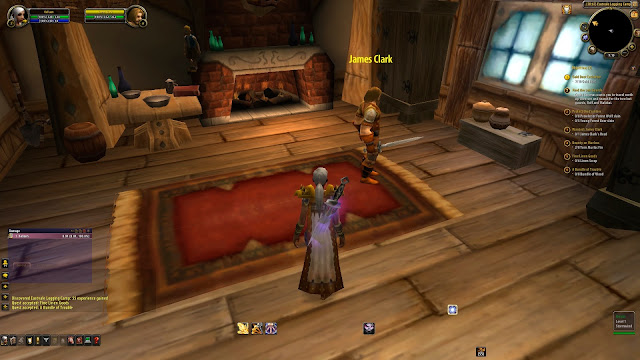 But I swear, in all the moments Mr. Clark and I have had to do the "dance," never once have I seen this creepy kid, Kevin, wondering around the room like a lost fly. He even tries to walk through the fireplace, up the table, on the mantle. There he is, in the shadows.

Now, watching him wander around the tiny shack, all of these scenes from old Westerns kept playing in my head: "Son, I don't wanna go shootin' your pappy while you're here..." Or that scene from Kill Bill where the Black Mamba gets rid of Vivica A. Fox's character with a kindergartner in the house. That's enough to send any kid to years of therapy. So, yes, Kellean stood there for a long time, watching Kevin, perplexed, and morally confused. But, whatever. Got the screenshot and that was that.
Posted by Matty at 5:00 PM

Email ThisBlogThis!Share to TwitterShare to FacebookShare to Pinterest
Labels: #wowscreenshotaday, day 24, in the background