Sometimes to explain a theme use of contrast works well. Case in point:

The late, great, Ceniza, the Ash Witch of Theramore: 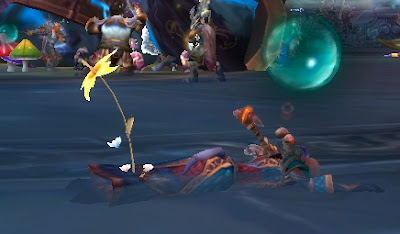 Yes, this is our fiery mage, lying face down in a rain puddle of troll-y slobber and sweat, in virtual limbo between 'release spirit' and a 'member is still in combat.' Fortunately she has her mourning glory sprouting out of her tail, memorializing the moment, and adding a smirk to my face. Ah, the indignities of death in LFR! The shame! The lack of blink, or ice block...oh well. For the concept of "early" I first thought it logical to see how many posts I've written about my early morning insomnia, but that would have taken me all day. And as far as early goes, for the most part, I like it. I like getting up when I do, having the house to myself, writing, making coffee, etc. It's those early mornings that run into long days in Azeroth though, where I fall down the rabbit hole and time and space is bent and deformed, like some cloven Rip Van Winkle. It is known I shall never be early for anything in Azeroth, though: I will never be a realm first, or do anything first, no blue ribbons or trophies here. But that's fine. As long as I can have magical flowers growing out of my fanny and take pond naps, I'll be fine. Just don't call me late for mana cakes, okay?
Posted by Matty at 4:03 PM

Email ThisBlogThis!Share to TwitterShare to FacebookShare to Pinterest
Labels: screenshot a day challenge