Hooray for mash-up posts, where I can ramble about anything, everything, and nothing all at the same time!

However, I promise some coherency: today's overarching theme is "fast" - I meant to take a screenshot of Kellda going fast with flames, the most wonderful of warlock glyphs, Glyph of Nightmare. The Nightmare should be more aptly named "Ghostrider Glyph" as it makes you feel all Nick-Cage whenever you're riding across water, as if leaking jet fuel behind you. I had forgotten I put this glyph in the other day, and was streaking across the murky, oily waters around the Isle of Thunder, when the flames erupted, as if by movie magic... 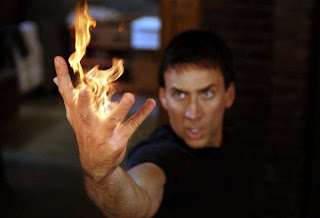 So, Tycertank, this one does not count because I cheated and borrowed a screenshot from MMO Champion. Why did I have to borrow one? Because I procrastined, got distracted, went searching for bears, stepped on a rock, dog ate my homework, and forgot to get my beautiful Kellda image:

So I wasn't fast enough in my clickings, runnings, and doings. No screenshot today.

Note to self: can dogs sense when one is getting into the flow of something? I swear, like pot-sniffing drug dogs or dogs who can sniff out peanut allergens, my dog senses the second I am actually getting into the groove, and does his yip/squeak thing...argh! How can I train him to NOT DO THIS? Where is that mage to turn him into a cat?

Now, thinking about Kellda makes me think about her green fire quest line. A hearty congratulations to Tyledres for accomplishing this very difficult challenge. I have put this one on the back-green-fire-burner, so to speak, for now. Most players I speak with say it's one of the most challenging things they've ever done, and somehow I have managed to put two on my plate. I worked hard to gear her up, but she's still kind of scruffy in some spots. Well, I say I worked hard, but we all know that hard work does not necessarily equate to success in Azeroth, just like real life.


Harder: The Dragon and I

The other challenge for Mataoka is her "it's complicated" relationship with Wrathion. I have gotten good advice from my friend Turk, have tried to get a few more pieces of good healer gear (the Xuen challenge may be too difficult for my fat, old fingers and character movement) but alas, once again the RNGs have decided I must be patient and earn Valor for a new helm. Turk has been raiding on his shaman, and does have good gear, but moreover is a really, really good shaman.

Let me just get this on the table right now: I know these are supposed to be hard. I know they are meant to be challenging and make a player feel as if they've 'done' something. They should. No question. But heroes and champions do not come in one-size-fits-all. Consider Harry Potter: if he didn't have Hermione's smarts or Ron's unflappable energy, he could not have done it alone. As it stands, the advice I've gotten is to get buffs from the NPCs and use the Celestial Coin. I bring food and flasks, and just when it seems I've got it handled, Wrathion's health bar is damn near full, something happens and boom, done. Now, if this were the "real world" and Deathwing was beating up on his son, I'd call the authorities and other helpers to come and save him. But alas, I am alone. It is unrealistic of me to wish that Blizzard offered another option for the legendary: I do much better on written tests than oral exams. This is silly of me to even think it, I know.

This is not a 'Schadenfreude' thing either, in fact, it relieved me that even Vidyala struggled, but overcame, obstacles in the mage portion of the quest.

What is it exactly, though?

Well...perhaps it's kind of a sourgrapes thing: if this is meant for players who don't raid, as kind of a "me too" thing, shouldn't it have been designed for players with 476-502 gear? Just in case there's not enough gear, rep, or lucky drops for a player whose time is spent, gee, I don't know, doing other things? I got SO excited when I read on WoW Insider this morning changes were coming to the questline, and then promptly deflated when I read it was just the frequency of drops for the admission tickets.  I just...I guess...I hoped...I would just finish this before the 5.4 patch. I just, for once, FOR ONCE, wanted to do something current, something in real game-time.

It's not meant to be.

And yes, I read the comments in Vidyala's post about folks completing it in LFR gear, and trying repeatedly, but at that point, to me it smacks me closer to besting Major Payne. Yes, this is a HUGE "Know Thy Class" quest: you'd better know your spells, buffs, all good things, all tricks, intimately and expertly: so yes, I'll be glad when it's done, but again, not sure how "accomplished" I'll feel. We'll see.

One thing that's kind of making me cloudy are the troubles with the US Post Office. I love real letters. Everyone does. But do I send them? No. I used to, but haven't lately. Shame on me. Better use it or lose it. Some of that excitement over getting a 'real' letter was supplanted by in-game letters. I have to thank Blizzard for unbinding these, so I can save some of my sweet, funny ones in banks. Heck, I've even seen some for sale on the Auction House...now why would anyone buy old mail? I don't know. Salacious secrets? Redacted national security plans? Who knows? In any case, I get my connection fix when I see little dots on ClustrMaps, in-game letters, and guild messages. But now with our faster technology, our more stealthy approaches, if folks check the site with cell phones, etc. I don't see dots anymore. I have to go on faith they check in with me; fortunately I have a lot of faith. I never expect comments, and am always humbled and grateful when folks stop by. So thanks. But like Charlie Brown waiting for his Valentine's, I'll keep checking my mail box. Some things don't get better when they're faster:

Theme Song: Harder, Better, Faster, Stronger/Daft Punk (being fast is just as annoying as this song)

Postscript: Word of the Day: Fomenting (thanks, Godmother!)

Email ThisBlogThis!Share to TwitterShare to FacebookShare to Pinterest
Labels: #wowscreenshot, 5.4, RTMT, Warlocks, Wrathion is a punk