and it hurt my head

...but watching it, it made a little more sense. Perhaps I can get this one off of my Quest Log soon.
Posted by Matty at 7:35 AM No comments:

Email ThisBlogThis!Share to TwitterShare to FacebookShare to Pinterest
Labels: Corla

Sometimes I wonder if I'm dead or alive. I live in a Morpheus dream-state; Epiales, the god of nightmares visits me frequently and socially, but this does not make me happy. Not knowing whether to damage monstrous souls with blight or bile, and the blood serves me poorly, too. I am an anemic Death Knight. I would eat raw shoveltusk steaks if I thought it would help.

Keeping balanced on my runes, and enough protection armor to see me and my minions safely through a difficult quest or dungeon hasn't been easy. I fail more than I succeed. Hero class? Me? Sometimes I just feel like a big phony. I got into this class by standing on the shoulder pads of greater players. No one can love me, or will. Not frisky and sweet like Mataoka, or fiercely independent like Haanta, the hunter, my Draenei ancestry only causes conflict within my fragile soul. Redemption and resurrection cannot clean the graveyard dirt from under my nails; no amount of scrubbing or repair can clear the conflicted emotions. Hanging out with the jovial and jocular Kalu'ak tribe, near Dragonblight, is warmth. Their friendly nature, down-to-earth advice, and warm blessing do cheer me.

However, I am still conflicted...should I tank, or damage? Should I just focus on damage, or brace myself to the criticisms, the slings and arrows of poor tanking? What if I make the wrong choice? What if everyone dies because of me? Do I want to be the biggest threat in the room, while simultaneously slipping further away from love and friendships? If I am under the spells of unholy damage, my minion faithfully serves by my side, but he is no match for a friendly fox pet or polar bear. He smells, too. Personal hygiene is not his forte. He's not much of a conversationalist either.

Note: many players get it right, though- http://forthebubbles.wordpress.com/2010/12/16/make-yourself-useful-the-cc-less-dps/ 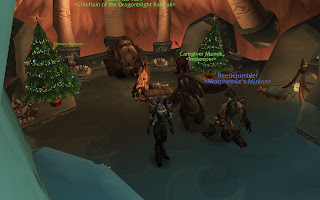 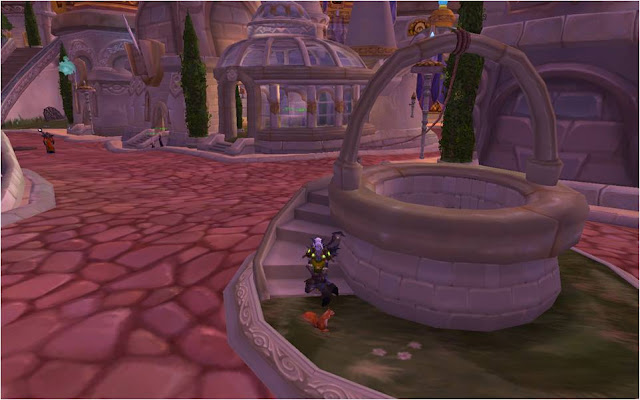 /cry
/need a hug
This town...is looking like a ghost town...(The Specials)
Sure enough, except for me, this squirrel and an undead mage or two, Dal is depleted. You who are familiar with the world, much more experienced and savvy than little two-horned me, knew this would happen. You knowingly smirked at the elementals coming to town before the big patch, saying "Ah, yes, remember when zombies roamed all over Stormwind (chuckle, smirk)?" Before Cata, everyone was scrambling to get the pre-patch cheeves, ones that won't come our way again. (I got a pretty necklace, and subsequently guilted into giving another one up in a dungeon by a whiney player. Why am I so damn nice?) I am sorry I missed the zombies, missed most, or if not all, of the Lich King (we still have some unresolved issues...can I get closure people!?) If Lady Jaina goes on Oprah to talk about their celebrity marriage, I'm going to punch someone in the throat.
But this is about me.
And the squirrel.
If nothing else, having 12,000,000 humans spend time in this world says something profound...human relationships are made and broken minute-by-minute in this game. People act like more racists, sexists, pigs, idiots and dorks in one minute of Trade Chat than in the last century. You know who you are.
But those same vulnerable humans also make friends, enjoy the world, and congratulate each other on their successes, too, and pick each other up from their failures. I was fortunate to quest with such a friend, but I suspect that due to real human conditions, he/she may not be able to play now. I don't know their "real" gender, I don't care; I don't know who they are, where they live, what they do, or who they know -- I'm a virtual creation, and live in a virtual space. Ah, the great unseen...I know you're still out there. In the tough human world of middle-class diminishment and capped incomes, the new Cata patch and monthly dues are just not in your guild bank right now. But, my human misses them, and hopes they are doing okay. I left a forwarding address in the mail box, and a message in an empty Captain Rumsey's bottle floating out in Booty Bay...
So, here I sit, missing my questing friends more than I can write (heart squeeze). I'll level up, do the new dungeons, pick fleas off of my guildmates' new Worgen fur coats, and carry your banner in my guildbank. Please come back if you can. It's draining my mana.
Posted by Matty at 12:04 PM No comments:

But- elves be warned - it may not be flattering to your kind. But in the spirit of the winter holidays, and a nod to Keeblers everywhere, be proud of your race, your ears, and your abs.

Email ThisBlogThis!Share to TwitterShare to FacebookShare to Pinterest
Labels: got a thing for elves? Casting couch, http://www.wired.com/underwire/author/loresjoberg/, Wired Magazine 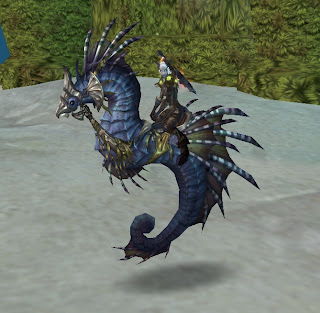 As much as we all love to complain about what things are wrong with our world, I gotta admit, these seahorses are beautiful...the whole of Vashj'ir is stunning. Questing in a non-linear mode, truly three-dimensional, (things coming up from the sand, overhead, sideways and backwards) has added a new flavor, and it ain't tuna. Granted, I have become somewhat water logged, and I am pretty sure I caught a nasty cold from the Earthern Ring shaman, (who reminds me of an old Jewish grandfather...'vat, you vant somethink? Go then, you vant I should help you vit this quest?') So, as I work on avoiding shark bites and jellyfish stings (I think I just spotted Spongebob behind that Obsidian deposit...) I will kick up the sand and free Willy, oh, Wil'ha? Wil'he? Won't he? Anyway, gonna go grab a Krabby patty and be on my way!
Posted by Matty at 10:26 AM No comments:

Email ThisBlogThis!Share to TwitterShare to FacebookShare to Pinterest
Labels: My pretty pony

You pallies, mages, priests and druids have abilities I am sorely lacking: buffs. Standing shyly at the gates of Alterac Valley, you all throw out your love to us like beads at Mardi Gras, never asking for anything in return, you just give, give, give...I feel like I showed up at a party without the right type of wine or hostess gift...shameful. A hearty "TY" and your "NP" just doesn't seem like enough gratitude...and no, I'm not going to lift my armor to get more beads.

Maybe if the good folks at Blizz would listen to ME once in awhile, and not throw out all that lawyer-y crap they do, protecting copyrights and blah blah blah, they would notice this little blondie has a few good ideas...for example, why not give others the gift of buffs, too?

Rogues would buff one and all with the "Oliver Twisted" pick-pocket ability for 60 minutes...good for us toons who get a little short on gold from upping our professions...

Myself, I would like the "Bandaid Buff," or the power to decrease health loss, create happiness and boo-boo kisses when a fellow player is feeling insecure, or if I get a "WTF MATAO?!?!" in a dungeon. /cry (I deserved it - suffering from dungeon fatigue, I made some bad choices one instance). Just a little sompim' sompim' to make it all better. Warrior feeling nerfed? Bandaid. Death Knight all emo? Bandaid. Hunter losing focus? You get the idea.

Now, I realize you Troll and Orc (cough) ladies have no issues with your femininity. You are more than comfortable with three-days' worth of beard growth and lip-ring infections. However, if you want to take a tip from those snooty Blood Elf girls, you may want to invest in a good Brazilian wax and nose-hair trimmer....just sayin'. Those BE sorority girls know a thing or two about metro-sexual BE males. (Those pretty boys sure can dance, though, and form the best boy bands.) A  "Beauty Buff" would not only change your appearance for raids and holiday quests, but might get you a date, too.
Posted by Matty at 10:10 AM No comments:

Email ThisBlogThis!Share to TwitterShare to FacebookShare to Pinterest
Labels: leaks and seeps 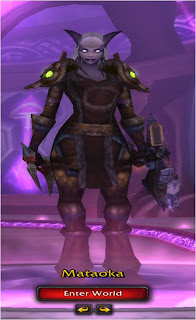 Does this tabard make my tail look fat? Don't answer that, not unless you want to keep your melee hand attached to your weapon...
Late last week:
Right now I'm warming my hooves in Tanaris, about to venture back into Uldman. I've already been trashed-talk by that scheming human, healed more fellow players, and cried over giving up my purples back to greens...stripped down and starting over. Was asked the other day if I was the "healy kind, the shocky kind or the bashy kind" of shaman. Love it. Bashy kind. But it's in my nature to heal...I think back on all my training, my longing for the gold to have dual spec, and wonder why I didn't get a degree in healing? Instead all I can do is toss down some totems and hope the tank loves me...
Now that dual spec is so cheap, I don't want it anymore, you know? Kind of like that Haris Pilton bag or whatever...I mean really?! Just more slots to hold more grey crap. I went with elemental, so I could throw rocks and play with matches, and cause a storm or two, but haven't used it as much as I thought I would. But when other players see me walking down the street, singing doo-wah-diddy-diddy-dum-diddy-dum, they say, HEY - healz please...that ain't my 'thang. Need something hacked? Call me...555-CUTZ.

Now my wolves...ah, my wolves...if I could only lessen their cool down to NEVER and keep them by my side at all times. But they are only Spirit Wolves after all, and I'm sure have better things to do than save my Draenei tail all the time -- they are guiding me in "independent" thought. Whatever.
Posted by Matty at 9:27 AM No comments: