Took my new landslide-enchanted weapon into a heroic today.

You know what would rock? (No pun intended.) If the day isn't quite all it should be, that, when the world is entered, your human failings would fall away.

And for the most part they do. Eh, just feeling a bit sensitive today, I guess. Today, I bore witness to those rare occasions (hahahaha!) when my job doesn't work. Should have left it across the return threshold.

Thanks, Isa, for going into the dungeon today, and for your perspective. Women tend to think it's all about them, that they have superpowers that supersede all pixels and pendejos*, and if we do anything less than perfection, we are less ourselves. I know plenty of men who are perfectionists, too, and it can be a bit debilitating. But you...

...you took this screen shot for me: 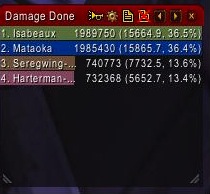 Now, that was a highlight, that Corla fight. No one made me stand in beams. (I offered, and did a fine beamy-job last time.) No one sassed me. The rest of the dungeon consisted of the warrior sending out brown-colored tells of recount. He and another mate spoke Spanish, but my ambassadorial charms did not seem to work on them. They were cowboys. Now Isa's (optimistic) perspective is that the warrior was throwing out recount data because he wanted us to see that he was one bad hombre. I took it more personally.

What makes a man, Mr. Lebowski?

LEBOWSKI
Funny–I can look back on a life of achievement, on challenges met, competitors bested, obstacles overcome. I’ve accomplished more than most men, and without the use of my legs. What?What makes a man, Mr. Lebowski?
DUDEDude.
LEBOWSKIHuh?
DUDEUh, I, I don’t know, sir.
LEBOWSKIIs it being prepared to do the right thing? Whatever the cost? Isn’t that that makes a man?
DUDEUmmm..sure. That and a pair of testicles.
LEBOWSKIYou’re joking. But perhaps you’re right.
Left the game, and looked at my brass plaques on the wall.

Was politely asked why I wasn't an elemental spec. Had a lot of reasons, and a longer back story than my friend wanted to listen to, however, the upshot is, I just don't like it.

And, perhaps it's just a curve on the universe, but Bubbles wrote this post, too: http://forthebubbles.wordpress.com/2011/05/06/your-optimal-isnt-mine/

*Sorry, mis amigos. I learned that word in The Brief Wondrous Life of Oscar Wao novel, other choice Spanish words. You both tried to keep me ignorant of that type of language, but cuss words cross all cultural barriers.
Posted by Matty at 7:08 PM