The cure for boredom is curiosity. There is no cure for curiosity.
Dorothy Parker, (attributed)

This was a wonderful, wonderful weekend. I promised myself to pour all the liquor and cigarettes, er, uh, rather not log on any more today, so I would truly find some balance. There was great food, people I love,  conversation, and got to play my face off. I confess I did overcook the &#!# turkey -- hate when I do that. I know how to cook one, but I am sure that last quest, that last daily, that last thing to craft, made me ignore the bird the last crucial 20 minutes when it could have been delicious, free range moist turkey instead of borderline turkey jerky. Gravy boat, where are you!? Everything else turned out great, though, and I think this weekend I may do some turkey redemption and just cook one to prove I can. At least I didn't leave the giblet package in the bird like I did the first year I was on my own. Another rite-of-passage was this was the first year I did not call my mom to get her recipe for cornbread stuffing -- just talked to her because. The stuffing was just fine.

But I don't think I can use the item recovery service from Blizzard to replace my overdone turkey.

Now, it wasn't all sage and cranberries this weekend though. There was a moment when my heart hurt a little, just a tiny bit of mourning for, well, a few things. It was hard to put my finger on at first, and I am not sure but perhaps unintentionally avoided this blog because if I ventured here, things would get stupidly emotional, and I just don't have it in me anymore to get emotional over Azerothian misadventures. I do wonder though, and suspect, that perhaps the new land isn't all it's made out to be. I know the forums have been basted with (see--still have turkeys on my mind) with all the concern, complaints, etc. over dailies. I do wonder if that was the breaking point for me personally - it would be normal for me to have the simple expectation to find a raid group with my same 'demographic' if you will, and just move forward. I don't have it in me right now to make new friends. I just don't. Yes, that is said in my 8-year-old voice in my head. And because of that lack of belonging/structure, and perhaps the umpteenth lesser charms, I felt something I haven't yet while playing: boredom.

Boredom is a tricky thing. It is a sentiment I am loathe to even say out loud, holding the belief that only boring people can get bored. See that darling Dorothy Parker quote? I am wondering if the cure for curiosity is dailies, or rather not cure, but "death of." (I had to check my subject/verb agreement on that one: let's see - step inside the grammarian's head: if I switched it to The cure is dailies, or The cure is not dailies, not The cure ARE dailies, heavens no! okay, grammar checked, moving on...) So, you're asking, why didn't you just walk away entirely? Well, because I'm functionally addicted. Whatsittoya? I'm also functionally addicted to bubble baths, writing, making lists, putting dairy products in the fridge, and keeping the dishwasher on a perpetual empty/filled rotation, but you don't see anyone having to sponsor me or call a therapist do you? (Sheesh, defensive!)

Here's what is new:

Mataoka: Have done every LFR as a healer I can. Amazing raids. Now I wish more than ever I had a good team that wanted me. I have three/four of the tier pieces, and have been lucky with drops. What I haven't been doing are the dailies for Golden Lotus so I can get shoulders or fill in where the drops don't. But then I asked myself, why bother? Just have fun, do LFR, and if a raid team needs a resto shaman healer then I'll be ready, or, Plan B; just play for fun and not worry about getting on a raid team. I think the next time I would be wise if I let the raid team find me. Very Zen and all that nonsense. I'm a really good healer, I know fight mechanics, and understand my enhancement spec, too. Still not sure how raid teams are looking for healers and yet...never mind.


Zeptepi: Now this is the one. This is the silly one--what sort of noob would want to make a holy priest her second main in MoP? Didn't I get the memo about lack of mana? Don't I feel parched constantly when trying to heal with her? Perhaps. But I am all for the underdog, and Zep is rocking. Every day I go in the Vale and kick Mogu butt -- but today took the prize.  I took on a big, bad mob of statues, fractured souls, mogu, and meanies all by myself and my Psyfiend. It was one of those moments in game where I was truly in the 'zone." I didn't die - I healed, shadow form, screamed, flayed, blasted, plague, whatever. It was amazing. For anyone who's ever played a shadow priest you understand the mesmerizing joy that experience was today.

Last night I started more pet battles with this character, and had Momokawa finish them up this morning. I don't need to say anything more about pet battle except this: baby black ram. Named him Necio. Pet battles are going to have to be for TV watching, couch, hanging out times because otherwise they are too addicting. Found myself spamming the greyed-out list for more, more, and MORE! Those trainers are some tough beeotches, too. The crux came with this one in Swamp of Sorrows. That is when I knew this wasn't your Pokemon kid stuff:
What was very pleasurable about pet battles which surprised me the most is getting out of Pandaria. It is gorgeous, amazing, perfect, sublime, and yet -- just to listen to familiar soundtracks while flying over other Azerothian stomping grounds was refreshing.

Ceniza: Ceniza has been working diligently on the farm. But yes-- I have alluded to a story in the works, even if the draft is only in my head. 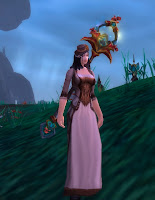 Did you know that you can fish from the spell book and not equip a pole? You probably did, but I'm not sure you, yeah you over there, not sure you knew that. I found that out yesterday because I didn't want to take off my weapons and then get eaten by something or other, so I just tried it. It worked. Plopped the line right in the swirly fish pool and got many a good catch.

Also, did you know that shamans no longer have underwater breathing? How did I find that out, you ask? The hard way. Always the hard way.

Did you know that the glyph of disguise is awesome? You did? Can't say it enough. So is the Vykrul thingy. (See Figure 2, Exhibit 1)

Oh, and one more thing. I don't think the Black Prince is who he says he is. Got a bad feeling about this. Very bad.


*604 refers to the points I need before Zep is revered with Golden Lotus. Really wanted closure today, but alas, not to be had. I am struggling with finding arbitrary 'end points' to play time. That's my real goal.


My new favorite band: Alberta Cross: Money for the Weekend

I think I know where the Christmas decorations are, and some work I took home that needs to get done before tomorrow, Monday. And they're not in Stormwind.

Postscript: To my close friends in game - always the highlight of my weekends in Azeroth - thank you, and I'm grateful for you all!
Posted by Matty at 12:54 PM