Yesterday evening, after basically two days' of play and miscellaneous life stuff, I realized that the inner dialogue in my head was just like every addicted personality I have ever known: rationalization, bargaining, enabling, and all that unhealthy stuff. I did not want to work on NaNoWriMo, (not, "could not," I "did not") and putzing around in Azeroth was having an AA meeting in a liquor store. Not a good idea. I turned off the game, put even the laptop far, far away from the TV room, and watched an old film, one of those classics that everyone should watch but probably don't think about, "The Third Man." It was----trippy. Post-war symbolism, setting Vienna, and yes, even Orson Welles.

And it's always about a dame, ain't it?

Afterwards, I turned to Cross-Dressing Rogue and admitted I need help. (Isn't that the first step?)

Help with what, you ask? The fact that I am becoming so chained, enslaved, to Azerothian duties. (I am a person who quit smoking cold turkey, but there were other motivating factors, so I know it can be done, but but but...)

He is an experienced game designer and player, and tried to remind me again that WoW is never meant to be "won." Ever. It has no beginning and no ending, and for someone like me who needs end-caps, this lack of structure and time-management is truly debilitating. Since the expansion came out particularly, I have been feeling this odd mix of having a great time/having the worst time in this chosen hobby. And it is an avocation. I considered that I'm coming up on my three-year anniversary this next May, and though there are many of my friends and loved ones who've been playing much longer, I got the end-game bug pretty bad. (Maybe the Klaxxi's sting is more venomous than we imagined.)

Earlier in the day, we both went off on a tiny rant about some of the ways Blizzard seems to sadistically hurt their long-time and newer players. I found this quote on MMO Melting Pot:

And Green Armadillo says that saying dailies, LFR or coin hunting is optional is rather like saying wearing pants is optional – “Lecturing the customer on why they are incorrect, not as good at playing the game as people who are beating the content with the minimum gear, and need to find new friends with lower expectations – however accurate all of these statements may be – is not a good business strategy. “

Yes, it is a bad business strategy, but they are the Breaking Bad geniuses, and that first taste is free. It's up to me to scrape together whatever intelligence I can muster and try to focus, really focus. Enter rationalization: it's hard. Each one of those alts provides another dimension to play time that is unique. I have really been enjoying starting to get serious about raid healing on Mataoka, and continue to privately, subtly, enjoy my enhancement spec for questing and kicking monster ass. As far as healing goes, I think I have potential to be a decent raid healer. Consider the other night I went in with less than stellar gear, and managed to get past the dogs at the gate. But the other alts, as I said in my choppy attempt at poetry, have this amazingly interconnected professional life.

All I wish -- really wish -- is that Blizzard got the altaholics like me. I don't want anything to be soulbound, I don't want anything to be limited. My alts are one person: me. If they're worried about illegal gold farming and such, I'm sorry. To me, it's like being worried about drug cartels or bootleggers when I want a glass of wine. Guess what? People are always going to skirt the law: there are systems in place to protect the economy of Azeroth, and have its legitimate players such as myself enjoy a few hours of play. I want when my druid plants a crop my shaman can water it. All efforts go across the board. Period. Done. Move on.


Part II: By Which I Get Serious About Restoration Shaman Specialization

MMO Melting Pot's guide is really terrific, in my opinion. Validated a few things, surprised me on some, and all in all a great, quick read. Hugh delivers as usual. I am off to Ask Mr. Robot (still like this site a lot) and see what's what.

Here is where I stand (and yes, I am standing on agility boots. Yes. Yes I am.) 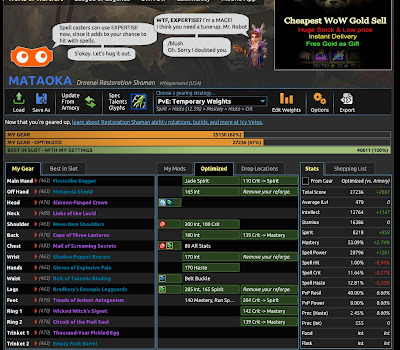 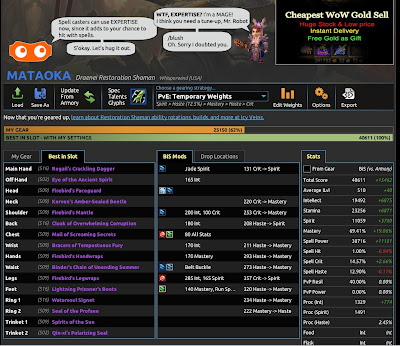 So: trying to focus. Trying. I know there are changes coming up in the next patch or whatever. I know. I may fly over the coo-coo's nest by then, and it may be too late.

In the meantime, I'm off to go boot shopping. Thank you, Icy!

Postscript: Update - who knows if I'll be raiding or not? Who knows? No one knows. No one. /Sigh
Posted by Matty at 11:16 AM

Email ThisBlogThis!Share to TwitterShare to FacebookShare to Pinterest
Labels: Warning: Use of Mataoka as a restoration shaman may be hazardous to your health.