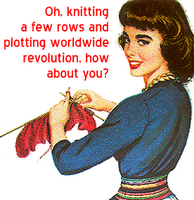 I recently took up knitting again. It's caused nothing but heartache, though, and I may have to give it up. The other afternoon, for example, I was in my knitting bee group, and wouldn't you know it? Susan  was doing a double-stocking-stitch backflip with her brand new Juno flax imported from rare blue goats in Spain, acting like no one would notice with that damn smug smile on her face! And then there was Helen, that bitch, who had a brand new pair of mother-of-pearl inlaid antique knitting needles she got off the Martha Stewart website, which must have cost her a fortune! (And we all know her husband is taking workman's comp now for his "back injury.") "Well," I thought to myself, "I'm going to just have to be the best damn knitter these knitting bee-otches have ever seen! I can buy baby alpaca yarn from the organic wool farm down the lane and knit myself up a pair of booties like they've never seen! Oh, the humanity of it all...the unraveling, the darning, the tears! Even sitting on the couch next to family, I get nothing but grief. The hideous clack of THOSE BLOODY NEEDLES! They shout. "PUT THAT AWAY! You're driving us crazy!" I just wanted to knit you a scarf for Christmas, I weep, pulling out my number 7s, my lucky number 7s mind you, and whip out a purl one knit two, or was it knit one, purl two, in a blaze of lanolin and mohair. I tried to get in with this elite group of Norweign Knitting Champions, but alas, did not have the correct round-needled cast off technique, and they roundly (no pun) rejected me. It was devastating. Now I don't even feel like knitting a beanie or bootie. Stupid hobby. Maybe I'll take up raising Persian cats instead. Or playing Farmville. What could be the harm in that?


For a grand conversation, check out: Playstyle Choices versus Game Constraints in Mists
Posted by Matty at 6:35 AM