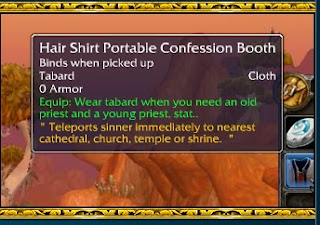 I think I may make this one a Blog Azeroth topic. And yes, I will put dates on it this time. Dios mio! People need deadlines! Concrete sequential! As my writing group motto says, "Writing is never finished, it's only due."

Okay, I am stalling.

I---I was an asshat the other day.

There. I said it.

But before I start confessing all sins, forgiving trespasses and walking in the valley stuff, I'll share something I think is pretty cool, and that is the priest glyph, Confession: 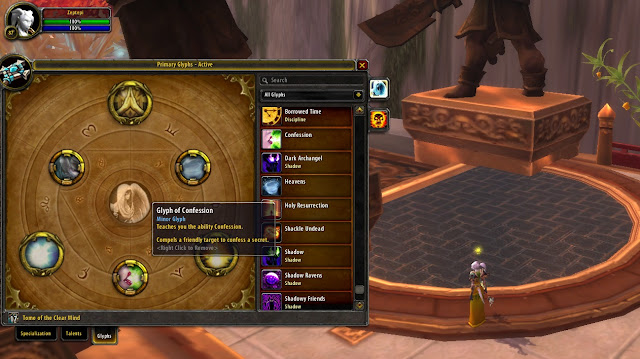 When one has this glyphed, it is a vanity spell that incites the target to confess some deep, dark secret. The most common sin is gnome-punting out of boredom and hooliganism. I really like this glyph, but must confess, I wish our glyphs slots were all a bit more hard-core, and the vanity slots separate. Think of it has driving a broken-down car, but the license plate has a great amount of swag and bling. Doesn't make the car drive any better. But, whatever. There are some fun ones, at least for priests and druids top my lists. I'm getting used to the new talent and glyph system, and I don't want to go too far out on a limb here, but I think...Blizzard might have been right about this one. Don't tell them said so, though.

Anyway, so here is my own confession: Earlier in the week I saw that the second LFR was open, and thought I would venture in there on my own, no guildmates or friends, and if I failed, I failed. I got into an in-progress Mogushan Vaults. No one was around. I could see everyone was dead, reviving, starting again. I see a button. And.

Yes, it was my "Alice drinking the bottle" moment. The moment where I jumped from the dock when I was seven and broke my foot. The moment at thirteen I decided to get on that skateboard. Yes, I wiped the raid. That starts the fight.


Now I have done that with my guild since, including last night. I was doing all right on the starry dragon fall-in-the-hole and yell FOR SPARTA until the last round and misheard my RL on Mumble - I could have sworn he said stay in...and then I see the ALL CAPS WHO IS IN and oh shit it's me and damn down the hole I go, and that last fight in Mogushan is pretty kick-ass and is going to take some decicated research on my part to figure out the mechanics, which seemed very simple to most, but were still a bit murky for me. Anyway, was laughing when someone, may have been RL, may have been someone else, asked what that button did. I kept my mouth shut, becaue I know what it does. Ah, yes. I know what it does.

My question, that I will post in BA, is this: What is one thing you've done in Azeroth that you've "gotten away with," and now you want to fess up. You are not alone:

Postscript: Flashy thing. You saw nothing.
Posted by Matty at 9:30 AM