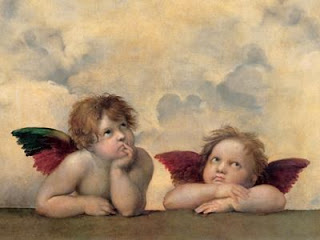 I am sitting here with my super-charged protein-packed bowl of flax and granola, heavy-duty black Starbucks coffee, and a whole lot of ideas in my head, while it struck me that I am really, really tired. Like the kind of tired where it takes all I got not to call in sick and crawl back into bed. And it's only Tuesday.

When is enough enough?

Over the weekend, I felt this thing, this weight, pressing down on my heart that I couldn’t explain.

Many in the normal dungeons were expressing envy over guildmates reaching level 90 and running heroic dungeons, getting the gear, rep, and mounts, and asking over and over, "How did you do that so fast?"

Let me state this: The expansion came out on Tuesday. These were feelings expressed on Sunday, not even a full week after one of the most mind-blowingly rich expansions ever. Achievement after achievement kept being  announced, cherubs with gossamer wings and angelic putti holding up the banners for all to see, “These Heroes Have Bent Time and Space! Not Only Have They Reached Level 90 in 48 or less hours, mortals! But they are now geared to run heroic runs AND get achievements! Tra-la-la-la!!!”

And, then on Monday, I found this article. I am going to copy/paste the whole thing, but will try to highlight those things that jumped out at me:

Turn Off the Phone (and the Tension)

One recent sweltering afternoon, a friend and I trekked to a new public pool, armed with books, sunglasses and icy drinks, planning to beat the heat with a swim. But upon our arrival, we had an unwelcome surprise: no cellphones were allowed in the pool area.

The ban threw me into a tailspin. I lingered by the locker where I had stashed my phone, wondering what messages, photos and updates I might already be missing.

After walking to the side of the pool and reluctantly stretching out on a towel by the water, my hands ached for my phone. I longed to upload details and pictures of my leisurely afternoon, and to skim through my various social networks to see how other friends were spending the weekend. Mostly, however, I wanted to make sure that there wasn’t some barbecue or summer music festival that we should be heading to instead.

My revelation — relearning the beauty of living in the moment, devoid of any digital link — may seem silly to people who are less attached to their devices. But for many people, smartphones and social networks have become lifelines — appendages that they are rarely without. As such, they can sway our moods, decisions and feelings.

One side effect of living an always-on digital life is the tension, along with the thrill, that can arise from being able to peep into people’s worlds at any moment and comparing their lives with yours. This tension may be inevitable at times, but it’s not inescapable. It’s possible to move beyond the angst that social media can provoke — and to be glad that we’ve done so.

Anil Dash, a writer and entrepreneur, called this phenomenon the “Joy of Missing Out,” or JOMO, in a recent blog post.

“There can be, and should be, a blissful, serene enjoyment in knowing, and celebrating, that there are folks out there having the time of their life at something that you might have loved to, but are simply skipping,” he wrote.
JOMO is the counterpoint to FOMO, or the “fear of missing out,” a term popularized last year by Caterina Fake, an entrepreneur and one of the founders of Flickr, the photo-sharing Web site.

“Social media has made us even more aware of the things we are missing out on,” she wrote in a blog post. “You’re home alone, but watching your friends’ status updates tell of a great party happening somewhere."

It may be that many people are in a kind of adolescence with social media and technology, still adjusting to the role that their new devices play in their lives. One day, the relationship may be less fraught.

The influence that technology can wield over our lives may lessen with time — as we grow accustomed to our devices and as the people who use them mature. In Mr. Dash’s case, the birth of his son, Malcolm, an adorable toddler who knows how to moonwalk, curbed his appetite for a hyperactive social life.
“I’ve been to amazing events,” Mr. Dash said. “I still am fortunate enough to get to attend moments and celebrations that are an incredible privilege to witness. But increasingly, my default answer to invitations is ‘no.’ ”

Social media sites, which ask you where you are, what you are doing and whom you are with, can cause people to exaggerate or feel the need to brag about their daily lives, said Sophia Dembling, the author of the coming book “The Introvert’s Way: Living a Quiet Life in a Noisy World."

“There is a lot of pressure in our culture to be an extrovert,” Ms. Dembling said. The trick to managing that, she said, is self-awareness. It’s crucial, she said, to remember that most people tend to post about the juiciest bits of their lives — the lavish vacations, the clambakes and the parties — and not about the trip to the dentist or the time the cat threw up on the rug.

“I have to remind myself that what I enjoy doing,” like spending time alone and reading, “is not what they enjoy doing,” she said. Those moments, while valuable in their own right, can be trickier to catch artfully on camera.
Joshua Gross, a developer living in the Dumbo neighborhood of Brooklyn, says he thinks that as a modern society, we are “overcommunicated.” There is simply too much information flowing across our devices at any moment, he said in a blog post.

A lot of the real-time information on the Web “isn’t stuff you need to act on right away,” he said in an interview. “And instead of one source vying for your attention, there are hundreds. It becomes too much for a person to handle, and it’s only going to get worse.”

Mr. Gross is among those working on solutions to the problem by creating services — including an application allowing users to save content from around the Web — that help stanch the flow of data that is streaming in at any moment.
Heavy users of social media can also adopt coping mechanisms — similar to training oneself to eat healthily — said Wilhelm Hofmann, an assistant professor who studies behavioral science at the University of Chicago Booth School of Business. “It’s a problem of self-control,” he said.

For those of us who don’t have a cute tot to help distract us from the siren call of social media, as Mr. Dash does, Mr. Hofmann recommends setting up a kind of screen diet, building in a period each day to go screenless, either by going for a run and leaving your phone at home, or by stashing it in a drawer during dinner or while hanging out with friends.

“Ask yourself: How important is this, really? How happy does it actually make you?” he said. “Harness that feeling of pride when you do resist and stick to it.”
That day at the pool, when I was forced to part with my device, reminded me of the charm of a life less connected — one that doesn’t need to be photographed or recorded, or compared with anyone else’s.

Eventually, the anxiety passed. I started to see my lack of a digital connection as a reprieve. Lounging in the sun and chatting with a friend without the intrusion of texts and alerts into our lives felt positively luxurious. That night, I even switched off my phone while mingling at a house party, content to be in one place for the evening and not distracted by any indecision about whether another party posted online looked better.


Now I am sitting here reminding myself of a few things:
1.       I have an amazing life. Take Friday for example. I stayed at the Edgewater Hotel , where both the Beatles and Led Zeppelin hung out.

2. I did take a picture of my dinner and posted it, for heaven's sake. Never again. (It was really good though.)

And while I am sitting here chastising myself for feeling any envy or anxiety over "not keeping up with the Joneses," the selfish feeling was probably more akin to guild loneliness. My guildmates in the big guild are wonderful folks, but I don't seem to have one "go to" like I did before at the start of an expansion (Guarf, I miss you!) It's not that I don't have great friends in game, but they're in other guilds. And I kept asking myself why I was feeling so damn lousy and sad? I didn't seem to when I went back to my little cottage guild, and it was just me and my buddy figuring the new stuff out. I didn't feel bad at all. And there was no reason--I was busy doing things in real life. But those 'real life' achievements don't count for a whole lot in Azeroth, and that is where I slapped myself. This FOMO, or fear of missing out, had taken over my better sense.

Social loneliness comes from when I find myself not being able to relate or connect to someone else, or a group, and there's a room full of people. I find what I say goofy-footed, and I get distracted by guildchat or announcements, so much that I am just like those folks in the article - so concerned or distracted by the stream of others' information that I forget to enjoy my own little world.

What I am wondering is for those of you in larger guilds, how do you handle any pressure, self-imposed or otherwise, to get "there," however ill-defined "there" is?

My guildmaster was funny yesterday---he called Blizzard a needy girlfriend. Used to be you could visit her on weekends and have fun, but the week days were for work. Amen, bro.

The NPCs no longer say the mantra, "Time is money, friend." They are telling us to "Slow Down."

Good advice.
But--there are those that to be ready for raiding with the best gear they can get, and reputations, and professional skills - that is what relaxes them and makes them happy, and I think it's important to recognize that, too. Others used to label me a "workaholic," but what I was doing made me happy, so it didn't feel like it.

But, two last thoughts:
1. If any of you overachievers complain one time, ONE TIME, that you are bored and went through the new content too fast, I swear to RNGs as my witness I will gank your gold and pinch you.
2. Ricky Gervais is pretty funny.

Told you it was random.

*the /gquit part comes from deciding if you should put down the metaphorical "cell phone" of the social aspects of the game, by not obsessively comparing oneself to others, like other social media venues seem to promote.