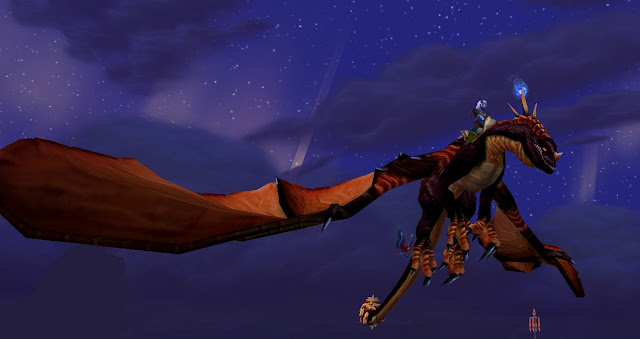 Part I
Nothing like that new dragon smell.
A few nights ago, had a less-than-satisfying run in Zul'Aman. And normally, my stubbornness or "stoic patience" would have won out, but I hit the wall, BIG TIME. (This will be an important detail later.) I'll take full responsibility for my play skills and actions. (I know I can do it - the first time I went through Zul'Aman was with a PUG and we did it in about 30-45 minutes, and I didn't die, or at least maybe once, but not...) Not sure what I was doing wrong a few nights ago, but it was kind of like being at a cocktail party for a fundraiser I didn't believe in: free booze, but damn, couldn't find common ground.

But literally, the moment I needed, nay -- HAD to go to sleep, I left, and wouldn't you know? The last boss dropped my helm I need: Headdress of Sharpened Vision. No Valor Points. No Helm. Nothing. Zilch. And I am pretty sure the group had a good laugh about it. Don't blame them. Irony is funny. But I made the call: four hours of Zul and many deaths are enough for any player, and I was about 300 gold poorer, and I am not sure the wiser: we all have had our Bataan Death marches, overstated, over-extended game play experiences.

Next night, got called off the bench for Throne of the Four Winds. I don't know what the hell I am doing, and what I did do was made a lot of mistakes. This earned me a permanent spot in the Stupidest Shaman Moves of All Time, a heart-to-heart with guildmaster, and a critique and review of my player skills from a new guildmate tonight. During a PUG. There's no "I" in team, but there is also no "I" in STFU either.

And, before some the ill-fated dungeon runs, good friend started off a conversation with, "Do you mind if I tell you something and you won't get mad" talk. Three different players, three different communication styles, three different ways to look Matty up and down, and think, "What the hell is wrong with that player--she's geared, but she sucks?"

Gentlemen: I totally get it. That must be so frustrating. It's got to be like watching an ugly woman drive a Ferrari, wrong on so many levels.

The award for best, most straight-forward talk: Guildmaster.
For gentlest, kindest talk: Priest.
For "this is not the time" talk: Guildmate.

And, thinking about it this morning, I was a suicide blonde yesterday. Took my guildmaster's observations of times when I'm a badass and decided to be that badass, or at least try, and I died so many times in Deadmines last night that I was the dead being mined, my armor went to the red, and I couldn't find the number for the suicide hotline. Literally at one point, I jumped over the railing right into the ogre boss trying to take a shortcut. Instant splat. (I used to jump off of stuff when I was a kid: earned me one broken foot at age 7.)

Now, I'm not sure what it is about me that I love to run to the fire. Sprint, even.

The advice I receive is meant with good intentions. And I promise: I am not complaining or apologizing. In fact, I listen to the play style of a guildmate I admire, and she is so funny and sarcastic, that I really do appreciate her moxie. The word 'moxie' was invented for her. And that voice! (Oh, you should be in broadcasting. A million men would tune in to listen to you.)

But I'm about to pack up that little shaman and send her to Horde camp. Not because I'm insecure, apologetic, or otherwise. But point of fact: she doesn't belong to you. These next few weeks, about three of them in fact, I have some real life stuff sitting on me like a virus. If I don't have time to go to Mr. Robot, or hit the target dummies, or grind Deadmines for my bracers, or make a chart about what gear goes where, it's not because I'm ignoring your well-intended advice. But I have to put it on ice for a bit. I will chip away at her, her resto spec, and her "get out of the fire" skills when I can. I'll get to it. Or I won't, for now.

sometimes I get lucky.

I know how to type /roll

Not sure why Lady Luck threw me this dragon bone, but here she is: The Black Drake from Sartharion's death. And a new title.


And she is beautiful. And I will be glad to go help anyone else who wants to roll for one. I'm good for it.
Postscript: A landslide enchant and a feathered-hug from a druid will help any girl sleep.

Part II: Pretenders/Brass In Pocket
Posted by Matty at 1:27 AM

Email ThisBlogThis!Share to TwitterShare to FacebookShare to Pinterest
Labels: Zul'Aman. death by a thousand pixel cuts