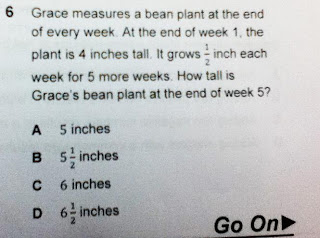 This question was the buzz on my Facebook threads yesterday. Before you judge me, think less of me, or consider me too stupid to live (and you will, trust me, after you read this next part) I could not figure out why the person who posted it considered it a 1. Bad question (it is) and 2. The answer wasn't D (although it says in the provided answer key that D is the answer). The sturm und drang this caused the Facebook community, and my own self-esteem, is forever scarred. It was like everyone got the joke, and I'm left starting at the bottom of my Cosmopolitan feeling quite stupid. It didn't help that many adults (not trolls, but presumably caring, compassionate adults) stated quite clearly that one would have to be stupid not to get this, and furthermore, it was simply a "reading comprehension" task. If you don't understand what it's asking you, you can't read and you're stupid.

I exposed my vulnerability and asked my own Facebook buddies the question, and received the Blessings of Respectful Answers. My sister, whom we call "the Judge," wisely and clearly stated both points of view, and one linear thinker stated it clearly is "C" and cannot be read any other way.

Here is the confusion:

Grace measures her plant at Week One: It can then be read as it grows for Five More Weeks. That would be Six Weeks Total. True. The Answer would Indeed Be 6.5". The question asks, "How tall is it at Week #5?" Well, that would be 6" of course. Elementary, my dear Watson. But--is it asking at the end of Week 5 meaning the end of the subsequent five weeks? Then the answer would be 6.5". Ultimately, the question is poorly worded for clarity. Remember, these are children who take this test, many of them whose first language is not English. Mr. Snerrgulss, my editor, re-wrote it:

Grace measures her marijuana plants weekly. She is due for a delivery in six weeks. By the end of week one, the plants are 4" tall. They grow 1/2" each week thereafter. How tall are they in six weeks? Follow up question: How much is bail money when she gets busted by the DEA?

Mr. Snergullllsssss is clearly not an educator.

Now, I won't go into all the reasons why this question upset me: I'll stick with this Azerothian angle. This is just a hypothesis of mine: is that feeling, that 'eureka' moment, the moment when I see the other point-of-view or figure out a puzzle while playing WoW something that is almost impossible to create, and is making me incredibly nostalgic? When I saw both points of view regarding this question, the mental relief was wonderful. How could I have not seen it?! When I first starting playing, oh my gosh, I was so green, such a noob. But everything seemed so new! And even if the bored trolls seemed so elitist and lackadaisical, just like the adults who understood this math problem immediately, and felt rightly smug about it, the rest of us kept scratching our heads trying to understand the punchline. Now, I go into an LFR, and though it is new, it's not. Though the dailies are fresh at first, they're not. Blizzard is probably wondering now, "What the hell is wrong with you people?! We come out with new patches constantly, and still you bitch!" I'm not bitching, Blizzard: I'm reflecting. The young leet druid would often yell at me, "JUST READ IT!" when it came to tool tips and quest logs. So read I did. Over and over, and blogs, and websites, and advice pages, and read again, ask questions, and try again. I am most engaged when I can figure out something new. I still ask questions, and I still read blogs and websites. The players in chat who constantly shout "Fail!" or other disparaging comments grow so tiresome. I think that's why I start new characters so often--I want to see what this button does, or that. My engagement is somewhat broken - I do want that feeling again, not just a line-up of microtransactions.

I heard Nat Pagle's voice in my head this morning, asking me to go fishing with him. I'm packing up a cooler of beer, and getting some fresh worms. I'm looking for some new challenges, so player friends: if you want to join me, or think of something - let's go. The answer is clearly "All of the above."
Posted by Matty at 5:45 AM