Today I'm up again at the crack of dawn to meet with my writing group. I was furiously writing a thesis paper last night (where did all this procrastination come from? I will figure that out tomorrow...) and trying to figure out transportation, so today will be spent in the big city, and I don't mean Dalaran.

I found this image a while ago, and thought it almost, but not quite, suited how I see Mataoka: 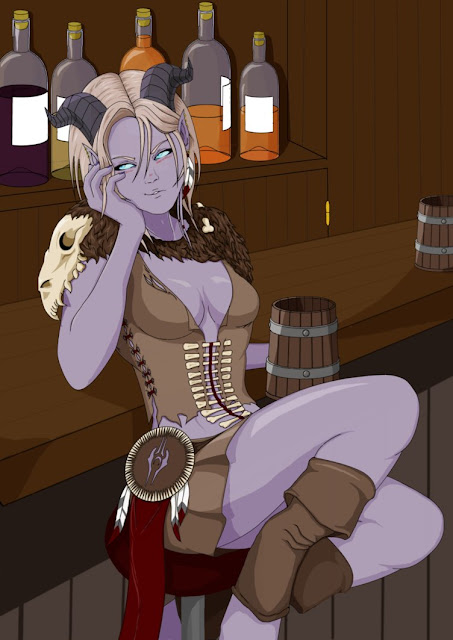 It's by an artist named Colindrina from Deviantart. Mataoka, at heart, loves to drink with Dwarfs and hang out in rowdy inns: this may be her before responsibilities and world fatigue begins to trip up her mojo. And look--her mug's empty. No wonder.

I will always treasure Vidyala's commissioned piece, however, as this is how she really is: 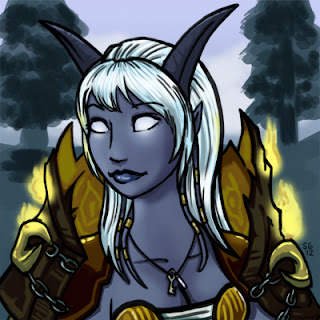 The thing about our characters is we are in (delusional) control over something that never ages, as we ourselves grow a little older. I've played Mataoka about 148 hours. Titan Panel tells me so every time I log on. My Titan Mirror, the one on my bathroom wall, tells me I've played my life a bit more than that. The scales tell me when I should have said no to that second glass of wine, or when I should have gone for a walk instead of farmed some ore. My blue jeans tell me the same thing in their silent refusal to snap buttons or zip up.

A good friend told me yesterday that when she hit this magical age number, she realized that she was getting happier and happier each day. Somehow psychologically the things that she cared about, namely, worrying about what others thought of her, suddenly didn't seem so important. Maybe it was her father's passing, and the concept of "don't sweat the small stuff" resonated with her deeply, and fundamentally. One can't "make" these epiphanies happen, but we can lay the groundwork for them.

Mataoka will never age, as I am. Does this mean as a character she'll never get to experience epiphanies of simply not giving a damn at a certain age? Well, she will if I write her narration that way, but otherwise, no. All those epiphanies belong to me.
Posted by Matty at 6:53 AM