You know that splashscreen/swipe that says something like, "Don't forget to get out of Azeroth once in awhile, and take your friends with you?" It is subtly expressing that Blizzard is doing its part to recognize that well, folks need fresh air once in a while. Until that day when the game becomes like a Wii fitness, and I can battle virtual monsters in my yoga pants (wait, damn, I don't have yoga pants!! That's my problem!)

Tomorrow is Mataoka's three-year 'creation' anniversary. Three years...sheesh! Where did the time go? What have I accomplished, in game, sure, but more importantly, outside of the game? To the Reflection Machine! (Cue whirring Batmobile soundtrack here.)

Well, let's see. Got to go to Blizzcon two years ago, and that was fun.
Listened to this story about a concentration camp survivor and famous cellist I had never heard of before: Janos Starker

On Saturday I met my writing buddies in downtown Seattle, and one of the member's husbands works in an architectural firm, so we were buzzed in by a handsome doorman who unlocked elevators that whisked us up to the third floor, and there were large tables, and books, and designs, and and and it was like a magical fairyland of professionalism and obtuse angles.

Why don't they have that in Azeroth? Dance studios, architecture, music lessons?

At one point we stopped in a wine-tasting bar. I've never been to an actual wine-tasting room before. Pro tip: if you're going to Seattle and want to go into one, do so before noon when the crowds start showing up. It feels both sneaky and debauched to start drinking wine at 11:45AM. Hey, only a tiny bit!

So my goals are to 1. buy some yoga pants 2. not wear them to the grocery store like I actually do yoga 3. start doing yoga 4. hold off on the wine tastings for a few months 5. get outside more


Cause they don't sell Spanx for Night Elves: 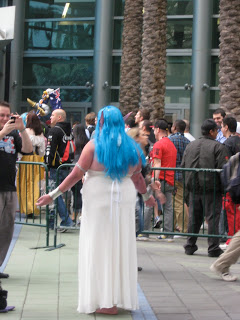 I'm going to be studying the dance moves of trolls and elves, too:

There are just too many amazing things on the Internet, even though some days I wish it was closed for repair. All the evil, bloody, and stupid stuff would go away, back to its hell-hole from whence it came. Right now, I'm going to go look up Maori dance music and traditional hula steps. Oh, some reggae would be lovely, too.

Email ThisBlogThis!Share to TwitterShare to FacebookShare to Pinterest
Labels: dance