My name is Matty. And I'm an altaholic.

I know that's an old joke, but I'm a in a post-holiday funk. I'll get over it. Nothing a little cleaning and Bacchanalian destruction can't fix. Friend says to me today, something about my "gold" issue, or lack thereof, some suggestions on how to fix it. Alas, I know how to fix it. Quit playing so many damn alts.

I have a former colleague, a great guy, ex-Marine, well-educated, awesome guy. He and his beautiful wife just welcomed their...fifth...sixth...child? Lost count. I teased him on number four asking him if he knew what was causing it, hardy har har- pretty sure he does. Now, he is not the one to have a grand discussion about zero-population growth necessities, global footprints, and all that silliness. But I do look at him and ponder where does he find the resources? I admire folks with larger families - that is a path I may have walked myself if circumstances were different. I make no judgment in their family planning: it is their business. For myself, my mother told me, "Never let them outnumber you." Advice I heeded.

But she does not play World of Warcraft.

Pretty shaman? Sure. I'll start with that. Complicated class, versatile, powerful. Sure. Let's spend almost three earth years (not sure of the play hours--I'll look it up later). Paladin? Naturally. Priest? Thank you, yes please. Mage, hunter, warlock, druid, death knight? Why sure! Always room for one more! But alas I fear, and this is tough to admit, I've become more Octa-mom than Mother Earth with all these damn alts. They're fun to make, but damn expensive.

And yes--I know. I KNOW. Time is money, friends. I understand game economics. But I feel compelled to share my thesis once more: I am not sure all the power holders at Blizzard understand the nature of fun.

For those changes that have benefited players with many alts, I applaud you. You get it. I know you're there, at the meetings, championing for fun-- there are the account-wide mounts, pets, BOAs, and when one is honored with a faction, all boats float so to speak with the commendations. It's grand. And yes, I feel somewhat like a fishwife, asking for one more thing, one more thing...but please: flying.

It doesn't even have to be Master. Or Artisan. Just one or the other account wide. 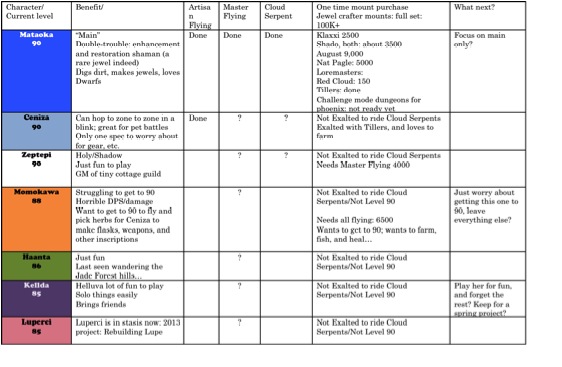 If I bought flying for the characters (whom I love to play) it would be upwards of 20,000 for the remaining faction mounts (not including the Cloud Serpents only Mataoka can ride, thinking they would be account-bound after exaltation) and the Tiller goats, which thankfully are account-wide. The flying lessons would be 42,500 for Artisan/Master on those who don't have it already, plus 15,000 for Cloud Serpent riding once they are all exalted with Cloud Serpents. Grand estimate: 77,500. And I can't even talk about the jewel crafting panthers, or the big yak thing.

I know many of you are masters of the gold game. I applaud you, too. Those of you who had the pocket change to get your Brawler's invitations, or a rare mount on the Black Market Auction House, or saved your coppers for just the right moment, and especially those of you who only play one or two characters. You spend the same monthly fees as I do, and have the same love of Azeroth as I do, yet seem to spend your time much more wisely. I must cry foul on this one though. I'm not asking for charity or a handout because I have a large brood of alts: I know some of you are thinking I'm like a welfare mom who can't seem to figure out "what's causing it." I can't ask for anything more to relieve the pain of dailies on so many alts: that is my own damn fault. I can't ask for anything more on account-wide mounts and pets, except to say if one gets exalted to ride pretty dragons, then all should be. Don't ask me to punch Saurok in the faces times six alts, please. Let me go do something else that's fun. And please don't tie up flying skills per character.

Remember, time is money, friend. And it's my time, and my money.

Maybe that's my cue to go do something else for a bit.

But not until I get my Scourged Whelping.