Ceniza saw ghosts and shades behind every pillar and post. She tried to dig her way out of the pain. She had blinked herself from mountaintop to sandy steppes hoping for reprieve from the taint of sorrow. One evening, she even tried to drink herself blind, but only succeeded in creating a nesting of darkness. Nothing worked. Would no small thing find peace? Was it all to be laid to waste, time and again, with monsters of fear and lizard-creatures who only practiced destruction? She flew over the acidic remains, smoking trails that stunk like a devil's arse and guarded by Hate's own soldiers. She could never blink away fast enough, or fade away long enough. 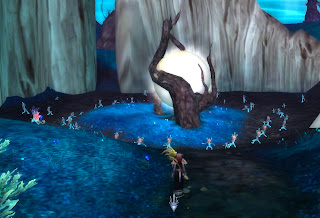 But light shines differently when it's a light of peace. From a distance, the orb glowed like the moon in love. She went down to investigate with great caution, and in fear, because the shrine was surrounded by tiny sprites worshipping and bowing: if these sprites saw her, they would rip her to shreds. A few of them were easily manageable and killed; however, this swarm would overrun and destroy her. Death by a thousand shards of tiny teeth. One of them spotted her, and paid her no mind. She stopped breathing, stomach clenched. And, she realized, they were peaceful, and would bring her no harm whatsoever.

Slowly she walk further into the glen, and tried to softly speak to the tallest one who was bold, and most likely their leader. He did his odd dance of one foot, hop to the other, and the other again, as if the ground was too hot for his tender feet. They all did 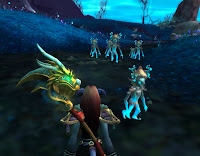 this bizarre act. She wished she could ask him why. He just pointed, and she saw hills of the tiny sprites; some obviously babies or children, and others somewhere in between this tall one here. None touched her, and none seemed to mind that she was there. Ceniza took out a fishing pole, and caught a few spinefish in a pond that seemed more complicated and alive than most large Azerothian cities. 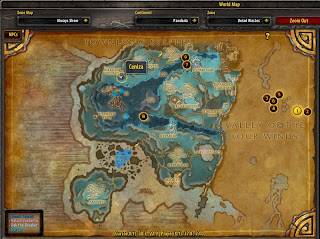 She wondered if others knew of this place, how the sprites appeared to be safe here, even in one of the most dangerous zones of the new land. She didn't want to linger too long, otherwise she may never go home, wherever that was. 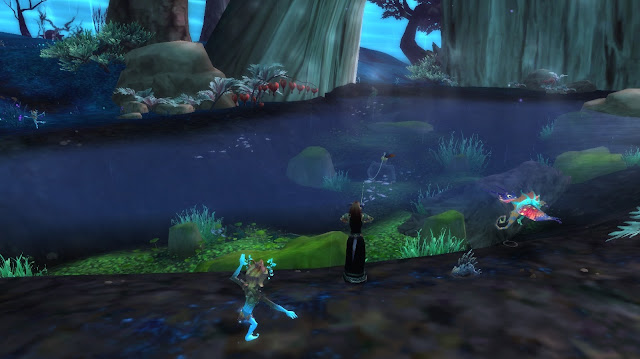 Writer's Note: I want to add sprites and more dragonlings to the list of companions, please.