Ceniza tried one more time. The person she thought was a friend, a dear friend, had caused unexpected tears to well up, yet again. No one would understand this. The only advice she had received was to get over it. Always good advice, and as with most intentions, easier for the giver and not the receiver. Thinking of gifts, was it--no this could not be--gold? Gifts that were given in friendship must have had an invisible cost she did not realize at the time. No matter what happened, though, she could not develop the callouses she needed to prevent the hurt. Never had she been so completely shut out, so harshly denied reason or logic to the end of a friendship. She was terrible at guessing games, but then again-- if the gold wasn't returned, the gold she tried to pay back for the gifts, so she had to reason that is was about that. Overwhelmingly, her worst character trait must be denial of pain and insult. This had broken her heart time and again. No matter what, she could not believe this person would be so petty, so spiteful, over gold.

The back of a hand makes for a lousy handkerchief however.

In a tiny corner of Teldrassil, a Night Elf hunter was trying to do something, well, that shouldn't be done. "Get in that mailbox!" he laughed as the tried to capture the squirming otter, to send whirling through the twister nether to his friend. Not too long ago, he had seen that she had put out an invitation to one and all in friendship, a welcoming home to any who are kind and friendly. Well, he supposed, he was kind and friendly, so why not? The otter zipped around the box, leaving puddles and a tuft of fur in its wake. He tried with another, and another. The otters were far more crafty than he. He wiped the otter spit off his hands with his pet, who almost went insane at the smell of mammals around his neck, and looked through his treasure trove of pets again. He finally conceded when the crab scuttled away, the cats scratched his face, and the snakes look indignant. He found a shy little penguin, a very special one she did not have, from the Kalu'ak. He sent that to her --and had no idea the joy he help rebound in her heart. His timing was perfect, as timing often is not. Turns out, penguins are perfect for drying tears.


My note:
This is not exactly how it happened, except for the timing, and there is a very angry sifang otter out there somewhere. Zwingli of Zwingli's Weblog of WoW saw that I posted my battletag out there, and took me up on my welcome mat of friendship offer. I love his blog, and let me tell you, he is a great guy! I couldn't figure out what to trade in return, but sent him a few things from the pet shop. I hope it's enough--who am I kidding? It'll never be enough. He was the spring in my emotional bounce-back. Thank you, Zwingli. And you're rocking the Safari Hat! 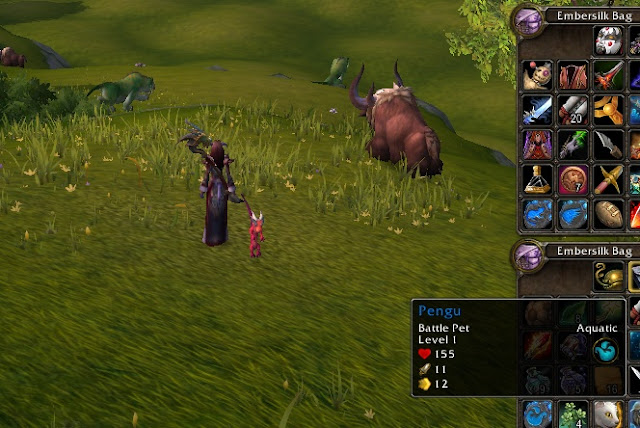 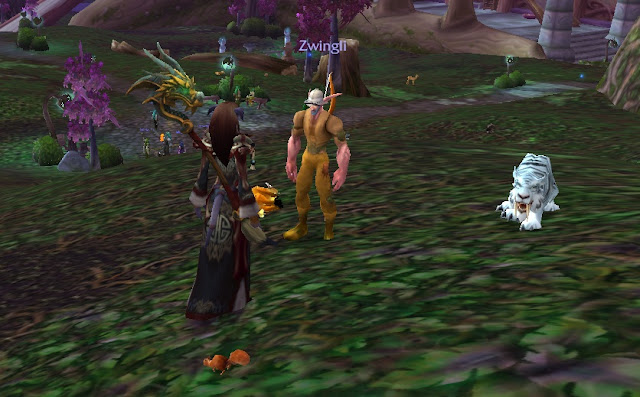 Postscript: I have no idea what to use those stones on.

Email ThisBlogThis!Share to TwitterShare to FacebookShare to Pinterest
Labels: Zwingli is amazing