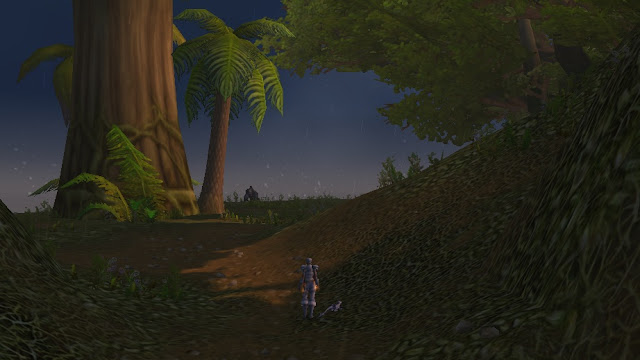 Rain on Jaguero Island was rarer than one might believe, given the lush tropical vegetation. There was an odd current between the straight of Northern Stranglethorn proper and this little piece of forgotten land that ran counter to seasonal expectations. Some rumored the goblin off-shore drilling may be having an effect on the climate, though no one had the authority to regulate their business practices. Rökkr knew it did have some effect, but not on this. The troubles on the island were brought upon by a different kind of monster. She waited for the rain with the best skill she had: patience. Her commanding officer had dismissed her as a weak link in the guild of rogues; she had been out of practice for some time, and never did seem to find the assassinator's heart her peers had. This mission was demeaning, she believed, but she was loyal. She had been sent to wait, wait as long as it took, to capture and protect the endangered baby apes. Poachers had been coming to this island for years, taking advantage of the rarity and the black-market trade of ape fur and ground teeth for aphrodisiac potions.

When the rain first hit her face, the baby apes on the island rambunctiously ran away from their protective mothers to play, and see saw that poachers were waiting on fiery mounts, killing their mothers, and snatching the babies in crates and bondage. She saw a weak one, and as quickly and stealthily as she could, grab it as its mother was shot. Rökkr had zero maternal instincts, but when the tiny ape wrapped his bristly arms around her neck, she knew her mission to rescue animals around Azeroth was the right path. She would just never admit that to her CO, however. He would think she was getting soft.
Posted by Matty at 8:50 AM