RTMT: Got my Hobbit Tickets*

My mind is about to explode: I completely forgot about update Tuesday. I really thought I would have some time to myself to stroll around the Sunsong Ranch, drink Gina's bad coffee, finish up revered on the Klaxxi (yes, I am doing this rep thing ALL WRONG) and now I am faced with a cargo hold full of blog post ideas, and -- gasp! The time to write them!?! Activate spin-out NOW! What to do? WHAT to write FIRST?

Enter Mr. Snergguls, my blog editor-in-chief, with his daily mud-sluice pomegranate smoothie and i-Pad (he follows Reddit like a Breaking Bad fan), and casually looks over my shoulder as I write- don't be surprised if he interjects a thought or two.

There is a shared topic on what we would all like to receive from Great Father Winter, the Saturnine jovial of Joves, who is patient but definitely sets up his boundaries. Don't try to click on his lap, folks, you can't sit there.

What do I want for Winter Veil?
Well I have already gotten the hozen elites neutered to plain old baddies that Ceniza can readily take on in the patch, so finishing up Tillers was easy-peasy. But, yes, being the grubby-pawed girl that I am, I do have a few requests:

1. Change the rep grinds NOW*. I am acquiesced to dailies. I am resigned. Sometimes I even like them. But for those of us who aren't lucky with drops, and want to stay current, trying to get a belt or trinket and then not being able to because we're weeks away from revered on a fraction of factions is fatiguing. (Hey, my alliteration buff isn't faded!) 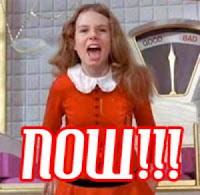 *This is spoken in a Veruca Salt voice, complete with stamp patten-leather clad foot and white stockings.

No, not this Veruca Salt, although they are greatly entertaining: Seether.

3. Bigger bags and cheaper tabs. (Sounds like the line from a country-western song...)

4. Flying cheaper, or BOA, across alts. (Ever heard of BOA? It's Blizzard Occasional Airlines. Sometimes they get you there, and sometimes they don't. Canceled reservations seem to happen quite a bit these days.)

5. This is going to sound odd, but I wish we had a "Goodwill" place. I even took a screenshot with this in mind yesterday, but it's on the laptop, and I'm too lazy to get up, find it, and post it. (It's bee a long week and it's only Tuesday, cut me a break.) The screenshot is of all the glyphs I try to sell, for super cheap mind you, one gold even, and they keep getting kicked back to me. I read Tome's post this morning, and she was talking about something similar. What I wish was this: Yes, after an attempt at selling stuff, or keeping it hanging around, I could put those lowbie materials in a place where players could just take what they need. I don't want to deal with it anymore, and I don't even need a receipt. But that might entice players -you get to write it off on your taxes! Hey!

6. Last: I wish we had free-agent guilds: Consider this a cross between LFR and standard guilds. Sometimes you just can't keep a character/toon in a guild, but this costs the guild time, recruitment hours, etc. For whatever reason we change guilds, it would be cool to be able to put together alt runs or other functions cross-guild and have it "count" somehow. The current guild system is blocky and chunky, and adheres to a culture which I don't think exists any longer in game. But what the hell do I know?

But everything else I wanted: great LFRs, more solo play and NPC interactions, are coming to fruition.

Mr. Snergguls tells me that if one wants to know all sides of the truth, (which is never linear, you black/white world seeing folks, but faceted like a fly's eye), one must include original sources and primary documents. The Horde's Warchief writes a blog of his own, did you know that? Of course you did. Granted this is from his POV, but aside from being a world-class baddie, he is also funny as hell. This post entitled Anger Management caused multiple spit-takes on my part. Bear has speculated on where all this is going, and in my own metacognitive processes, while reading it thought to myself how much of a noob I am when it comes to lore. I mean, really, truly, I don't know anything. So I looked it up: Why do the Horde and Alliance fight? Yes, there are great forum postings on WoW sites, but I thought this one summed things up nicely, too.

When I have a moment here and there, I jot down haikus and collective nouns. I came across this charming book: A Dignity of Dragons by Jacqueline K. Ogburn and illustrated by Nicoletta Ceccoli This should be on every parent's shopping list this year.

Navi Knows: Loved this post by Navi. Check it out.

JD the MasterMind: He's nominated Navi for something that's cool, and I couldn't agree more!

Oh, I know there's more, but Mr. Snergguls is looking at his watch like it has naked murlocs on it, and tapping his flappy finned foot. He's shooing me out the door, which is probably a good thing.

*All I really care about now anyway. Did you catch the Colbert Report week on the Hobbit? Holy Gandalf, does Stephen Colbert know his shit about LOTR or WHAT?! It was incredible. Highly recommend finding the original episodes if you missed them.
Posted by Matty at 6:34 AM