Ricket grabbed her stag buckskin gloves, encrusted with oil and blood of unspecified origin, and carefully threw the tarp over her baby: a twin-engine turbo combustion AirSkye Angel 2000. She never understood why she and her clan left the warmth of the south for these northern hills. She often laughed at how stupidly they were named: Storm Peaks! It rarely snowed, so that was a blessing, because when it did, the snow had a life of its own. It blew from all directions: from the trees, the sides of the steep cliffs, it even seemed to slice down from the Vykrul village just up the ridge, as if they controlled the fierceness of the storms with their blue, angry moods. The tarp secured, she gently patted the plane, muttering under her icy breath, “It’s okay baby, storm’ll be over soon, don’t worry sweetheart, ya, it’ll be okay.” Out of the corner of her eye she caught of flash of purple and fuchsia…it was hard not to miss. What in Thrall’s name was this?! A human, no, a warlock, was out in the middle of the storm, talking to a turtle and a fox? Some sort of bizarre ritual was taking place, that is for sure, and it was none of Ricket’s business. She shrugged and went inside for some hot nog and smuggled rum. Crazy humans. 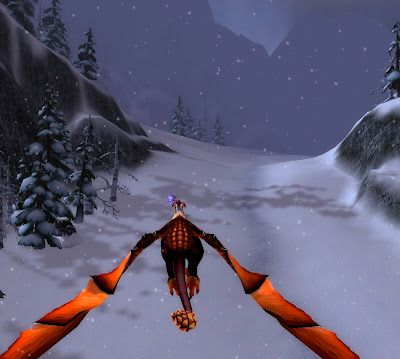 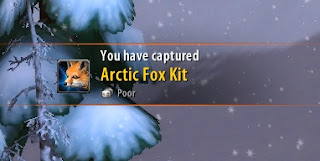 Editor's Note: So as to keep the arctic fox population viable, Kellda immediately used her beast stone to raise its level to rare.

And there is no better name for this fox than "Kitsune."
Posted by Matty at 5:55 AM