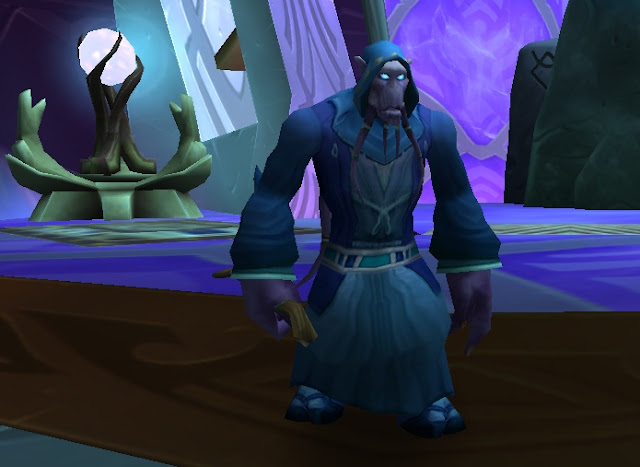 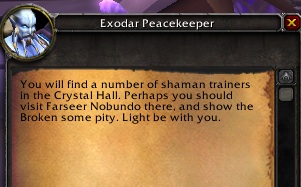 Shamans should never lose their way. Shamans, by soul and nature, are always centered, balanced, and true. A totem marks the center, wherever it is planted, wherever it is raised, and becomes the focal point: no linear tightrope defines who they are. So it is the greatest affliction of all for shamans who are lost. Farseer Nobundo knew his child was hidden from his vision. The Broken never lose hope. He knew what the Peacekeepers said to visitors and pilgrims, that he deserved a visit, he deserved pity. He just shook his head. Those who carry the Light do not need pity. Pity is for those in the darkness; pity is for those who are blind. The dismissive Peacekeepers, giving out blessings of Light like trinkets to babies: Nobundo knew they had forgotten, and forgetting one's past is the greatest curse of all. But only living in the past: that was far worse. Daily, he forgave them.

Mataoka was blind: blind to joy, deaf to song. No one needed her, but flattery deteriorated and ate at her soul, acidic raindrops falling on her armor. Her faith had become pitted, rusty, and compromised. The Princes rained falsities, tricks, and shams, or over-eager optimism. One side leading her this way, the other that. She lost balance, and fell. The battles began to taste like ash, the blood like water, and the anger--the rage--those were reserved squarely for the gods.

All the respect and accolades she had earned over the years broke and crumbled with each defeat. They meant nothing. Every time she prayed for luck, for glory, she met mocking giggles from the gods. Inner doubts began to control her. "Give up." "Others will pass you by." "You are only as good as your last battle...and no one remembers your last battle." A paladin sidled up to her during one raid, whispering in her ear how beautiful she was, how deadly, but gloriously stunning, and she resisted the urge to find a pool and clean out her ears. The flattery of a snake, tempting and dangerous. She felt sick.

Did she fall to her knees in despair? Did she go in a dark, secret place to wait out the fears? No --worse. She kept fighting. The same manic dance, the same voices, the same curses and threats, until the repetition made her insane. It would have been wiser to hide. But some voice, some other voice, spoke more firmly, more clearly than the others: it told her to go home.

To the Azuremyst hills, the palatial pines and periwinkle skies, she started for home. She could find her way there. If you asked her now, what was the cure, she would not be able to tell you--it was still elusive. The tired adages of 'it's the journey, not the glory' seemed so hollow, and watery-thin. But if she could articulate anything, it would be to listen--quiet and still--listen. She veered toward the Exodar instead, and sought Norbundo.

The Broken held her face, and without speaking, imparted this knowledge: "You will walk on the blade's edge, and you will have to choose. You may not think it is a choice, after all, but your fate handed to you by the gods, but this is the greatest deceit of all. It will be a choice. You are given two paths, and you will walk them at the same time. The road will be dangerous and sustaining, monsters and samaritans, dark and light, and it is the same road. Walk in peace child, and know where you are. Look."

With his blessing, Mataoka, humbled and nourished, her heart lightened, her spirit renewed, and felt  the release of want, greed, and desire. She kept her passion and love.

And the gods smiled on her.