Dear Matty:
Your fiery temper comes through in your writing, so I am not sure you can help me, but have no where else to turn. The new content in 5.2 is--how can I say it? Truly wonderful --there's a cumulation of narrative, and my wish of having more to do on my own, on my own schedule, is finally coming true. I feel like I did when I first started playing--like everything is new and fresh, and I'm a part of it. I've desperately wanted to recreate that sensation, and for the first time in three years of playing, I almost got there. Until, enter the guildmate. The guildmate who's nice, friendly, helpful, etc., but has a tendency for 'one upmanship' in lieu of sharing, and of unsolicited advice. I got a stream of advice for the Throne scenario, Youtube links, strategies, etc. It was like reading a dungeon journal, but in real time. I didn't want to be rude, and couldn't figure out how to tell him to stop. In the meantime, I was doing a scenario for Jaina and was preoccupied with that, so I could mostly disregard the advice. But the damage was done. When I got a moment, I tried to express that I just wanted to go in there, even if I failed. He couldn't know what emotional connection I was trying to achieve in the game, so it's not his fault, but it was kind of ruined for me. But the crusher was--before I went he asked me to heal the Setting The Trap quest; I asked if it had to be now, he said yes, so I stopped everything, changed specs, and went in there. Somewhere during it I noticed the beast was not dying. I questioned this and he said something like, 'didn't I get the memo to change to dps?' No, no I didn't because the cat caught on fire, the chili boiled over, and the garlic toast was being eaten by the dog, or something. So, yes, the one second I look away...we were in combat anyway. Fine, monster dead, back to what I was doing. It took about ten minutes because I kept aggroing stuff while in my healer spec, and they were all long gone. So I went into the Throne, and got three of the stones from the run, and here is why I'm mad: I kind of purposefully sabotaged myself out of stubbornness to try to recreate sensation of discovering it on my own. I did get some okay things, but not the awesome stuff. But I did get the stones, and then the Setting the Trap quest, and wouldn't you know, when I shared that in guild chat, not one of them offered to help me finish it That was the cherry on the fart.

Here's my question: besides DND, is there any polite way to get people to listen when you want them to be quiet?

No. You can't get people to read between the lines. Subtly doesn't work in guild chat.

I think you answered your own question, and you just want to feel absolved over the guilt of wanting to play on your own, and not be a rude twit, too. I'm sure your guildmate was just excited and enthusiastic too, and we all go into Azeroth for some level of social interaction. If this truly begins to bug you, you may just want to put an alt in that guild you seldom play, and join a tiny one. But you really need to look at the cost/benefit of this: there are times you do want help, and being part of a larger guild does have its social benefits. Consider it like a union: you pay your dues, and hopefully the return on investment is feeling happy and comfortable. Maybe when you log on, you can greet players and let them know you're doing solo content, so your DND button will be on, or let them know you're turning off guild chat for some personal play reasons. If they know ahead of time "you're not home," they'll respect that.

And I can't help but think of the Burgess Meredith character in that Twilight Zone episode where he gets all the time he needs to read--when you break your glasses, it'd be nice to have a discount on repair bills. 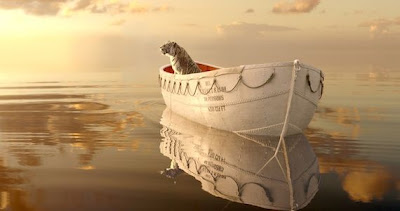 Now go log off, take a bubble bath, and read a good book. I highly recommend Life of Pi before you see the movie, which is dazzling. Makes you think about being alone, God, and stuff. Damn, did I just give you unsolicited advice too? My bad.
Posted by Matty at 9:00 PM