Most of the Children's Week fan fiction writings take on a sarcastic, funny tone: that is totally appreciated and understandable. The I Like Bubbles post below is brilliant, with just the right amount of edge and care. But my (creative) reaction has been a bit different over the week. Guess my own maternal instincts outmaneuvered my own snark factor. You have been warned:

The task seemed insurmountable, as if the finger-holds would turn to greasy slime and slide her away from the goal. Troll rogues, Orc warriors, and Blood Elf mages repeatedly stabbed, chilled, and sliced her open to bleed, time and time again, until the Spirit Guides growled in exhaustion. Glowing hot hammers would rain down from a Blood Elf male paladin named Lynuzz, cracking her skull open, sending her reeling from shock waves of pain. He was single-handedly responsible for at least seven of her deaths.
Her skin, gritty and scabby with dried blood and wounds, felt dry and tired. Hot tears did nothing to wash away the sense of defeat and anger. The tears burned like gasoline, igniting hot rage in her heart. She breathed revenge. She considered going to other worlds and eviscerating Horde who had laughed while they cowardly butchered her. This part of the world was too violent, too brutal: this was not some monster whose sole purpose was to fight a group of united comrades, with its strings being pulled by pre-designed machinations: these other human players seemed to take too much pleasure in killing. And that was too raw for Mat to taste. There is no mercy for children sometimes, and there was little for Mat, as well. For one who prides herself with being able to understand the good and hope in others, when she senses the evil in others, the effects are conversely horrifying. She could not speak their language, she could not motion or translate. Frozen in dirty ice: a hug, a white flag of peace, a diplomatic dispel did nothing but provoke and enrage them. She had no tools, no charms, for this. They were completely "other." There will be a permanent scar under her chin, along her neck, forever reminding her of her failings in battle. These repeated battles, when only out of sheer luck, determination, cooperation, and timing did she complete them, did not provide her a sense of accomplishment or victory. The blades of battle tarnished and dulled. Cranking up the field communication lines, she reported the progress, or lack thereof, to her commanding officer: reinforcements would be sent in if need be. This heartened her so much that perhaps it was just the blessing she needed to go into the next battle at Warsong, and complete the archipelago of battles required.
At first, when given the mission of showing an orphan around the world, the task was at best irksome. Mat could barely take care of herself, let alone a small child, one who violently had lost his or her parents. But, most of the quests were not difficult, in fact, a bit fun: sugary treats, toys, visits to dragons. The human boy found his own way back to the orphanage, so Mat decided perhaps it was time to waltz a little Draenei girl around. She, Dornaa, was far braver than Mat: her innocence and loss paradoxically enveloped and protected the child. She would follow Mat everywhere, keeping up the pace of battles and quests with no exertion or complaint. Her manners were impeccable: Dornaa's parents must have been loving, firm parents, to have given her such a strong foothold in the world before they were taken out.
Matty is reluctant now to give the child back. In fact, one may even go as far as to say she is a bit heartbroken. She wishes she could raise Dornaa as her own, (replacing the argent squire, who serves no purpose other than to trail behind, tripping over his feet). Dornaa is as sharp as an axe, as intelligent as a mage, and as beautiful as any Draenei female should be. But children have their own minds, and own paths. Mat knows logically that Dornaa couldn't, wouldn't, be the daughter she would never have, a small replacement, a facsimile of her own destiny. Dornaa smells like chocolate and soap, with a bit of puppy-dog fur mixed in for grit. She hugs as tight as a gift, and is an old soul, with the patience of a Kurenai elder. She will miss this little warm shadow until next year, because although Mat completed the goals of the achievement, when next year rolls around, she'll go back to the Shattrath orphanage, and see if she can find Dornaa again, just to see how much she's grown. 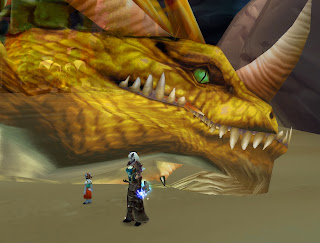 
Theme song: Baby Mine/Bonnie Raitt and Was Not Was
"Learn something new everyday section:"

Email ThisBlogThis!Share to TwitterShare to FacebookShare to Pinterest
Labels: ficlet, For the Children