RTMT on a Wednesday: You keep using that word….

…I do not think you know what it means.

Recent events have made me think about the connotations of this word. The denotation, belonging to a select group, conjures up synonyms such as 'snobbery,' and deserving of entitlement or reward without merit. This word gets tossed around in a pejorative fashion to "put down" or shame those who are expressing an opinion or perspective, and often feels lonely unless it has its friend "snob" right next to it.

But snobbery means exclusion, and I find it paradoxical when the label snob is applied to those who are striving to be inclusive and fair.

But maybe there is no 'fair' and never will be.

And let me clarify: when I say recent events I mean many in and out of Azeroth.

Being elite in terms of talent (see above) means one has crafted a mastery of some skill, trade, or profession. It does give one the right to be proud of those accomplishments, however, it does not give one the right to:
*Use knowledge as a bludgeon
*Stop learning and growing: the true "elitists" I know (and I am speaking of those both in and out of Azeroth) are constantly reflecting and reexamining their practice. This does not mean they forget all worthy knowledge, but build on it. I remember several years ago a friend had a sick little boy, and took him to the doctor. The young doctor had no clue what was wrong, but the older pediatrician knew immediately it was measles. Because vaccines had eradicated much of this, the younger or less experienced doctor wasn't familiar with this once-common childhood illness. This young doctor may have been feeling pretty confident about things, but realized he could still learn a thing or two.  This is my belief: those who are elite with talent stay that way because they continue to do the hard work. Is this special snowflake-ism to an extreme? Perhaps. But I sure would hate to be the one to tell a child they might as well give up right now because anything they do someone will do better. Might as well stop right now.

Whenever I encounter someone who's insecure, they seem to talk the loudest. I heard it on Vent last night. I read it on Facebook this morning. And in my own day, if I fall to cussing/swearing it is out of sheer frustration and defeat, and yes, insecurity. I try the path of tranquility and enlightenment, and yet sometimes careen into the muck. I had a colleague cracking up yesterday morning in a meeting when I said, "I am the Princess of Darkness and Shadow. Deal with it." I decided to pretty much write off the month of November every year. Blizzcon sunshine aside, November kind of blows.

I misspoke in Vent yesterday saying something about a country in Africa and I know Africa is a continent. I then basically was told my profession (and those in it) is stupid and dumb and dumb and stupid. I paraphrase, of course. But it did strike a nerve, because some of the things and issues I articulate and try to handle in a professional way are met with immature, ignorant folks. Does that make me an elitist? If you're using that word to put me down, go right ahead. But I have done the homework, training, and damn hard work. Stop using that word to try to hurt me. Instead, be proud of your own accomplishments, and be proud of your own dreams and aspirations. That's only fair.

Now, enough of that. Here is a picture of a stingray photo-bombing some ladies: 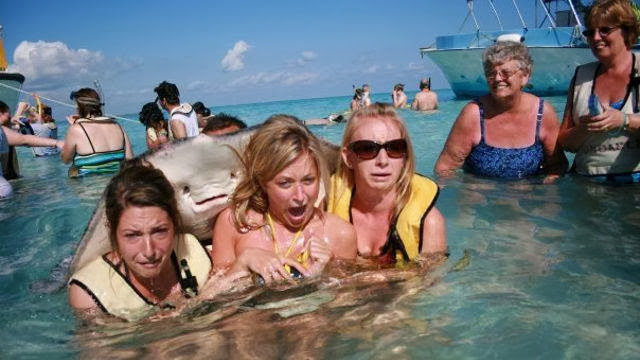 PS Because of my "elitist" attitude, if I choose the path of "life is too short" and decide to not read one's Facebook blatherings or rabble-rousing mob-mentality silliness, then so be it. Princess of D&S OUT.
Posted by Matty at 7:05 AM