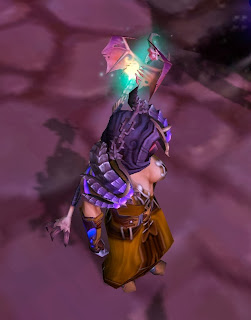 First: DISCLAIMER - I have not played with i-Movie. It's obvious. I used to know my sh*t, but now…too tired and too impulsive. But here is a little clip of something I think is so fabulous, so epically awesome, I hand over my money to Blizzard month after month, even though the 9th Anniversary Gift was sSOOoooooOOOOoo LAME.

Lame, I tell you.

King of pisses off this warlock. The shaman just retreated to her health spa. The priest just meditated. And the tank just polished her gear. But the warlock….

Better make it good, Blizzard. Give me something I want. Now.


Kellda has been coveting that Sulfar Stave for a long time. The druid has it - ugh! DRUIDS! With their leafffishness and Mylunes and hippity-hoppity through the meadows bullish*t - makes a warlock want to spit fel-loogies. But she trekked into Naxx tonight, and the oogie-boogie dude decided to cough it up. It has the coolest animation, right out of Nightmare Before Christmas...