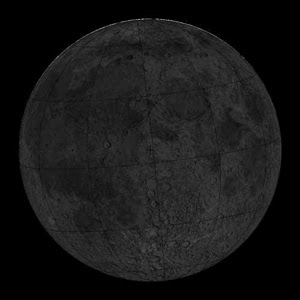 The tomcat lived with the consequences, as did Mrs. Whitworth. The ritual required uncomplicated duplicity, his stock and trade. And for a male with simple motivations, he would never fully understand why he did what he did.

The time grew near: the portals would open, making the faire's business booming once again. The wolves demanded their price before the two-legged creatures returned. The beasties cleaned up the games and ashweed traces, and wandered back to their hibernating facades. Mrs. Whitworth understood the attraction of the animals and beasts, understood why they never protested staying behind. This was the time of her life.

The girl never once called for her, or tried to reach her. Mrs. W had never loved someone so deeply, until the tomcat, as the girl loved her, to understand the scraped-out fearful loss, the admittance that hope was gone. Each night the girl filled Mrs. W's bowl with fresh cream, and banked the embers just so in the hearth so in case she came home the room would be warm. She had been gone nearly a month, and the girl knew the dark woods prowled terrible, powerful wolves. The wolves, it was told, were borne of the moon herself. These wolves worked magic, as if being a wolf wasn't powerful enough, superfluous. The dark woods wolves held majesty the scruffy country wolves around her home couldn't begin to imagine. From a logical position, the girl reasoned, the food supply in the woods must be rabbits and whatever stray they could find: though one horrifying story of a druid in stag form who lost the ability to shape-shift, strayed into the woods drunk one faire night and was never seen again. Perhaps it was the wolves' powerful moon-craft that destroyed the druid. She shuddered and wrung her hands.

"Can you see anything?" he asked.

"No, not a thing, and the moon is gone tonight, too: so if I do this I can stay forever?" Reserved excitement steadied her voice.

"Yes, and it's easy--many others have done it who aren't nearly as clever or as beautiful as you. (He wondered why he flattered her, and felt sick to his stomach.) We just walk through the cannonball tunnels and if one doesn't drop on your head, you will receive a reward. You can't peak, or you'll spoil it for yourself."

As he led her down the fairway, the animals looked from their cages solemnly, eyes following the pair to the hole. They spoke silent animal prayers to themselves, prayers made of grateful, intact fur and warm laps.

Mrs. Whitworth chalked up her unease to the disorientation of following blindly, but her instincts, human and animal, gnawed at her. By the end of the hole, she heard the growls of the wolves, and knew it was too late. The tomcat pushed her out, and the wolves gave chase. The blindfold wrapped itself as a noose around her neck, but at least she could make out grey, pencil thin outlines of trees. She ran for her life. The pack clawed up turf, moved sideways at full speed, to get the prey. She heard the teeth snap with saliva spewing, and found purchase in a tree. On the way up, her back leg stuck in a knot, snapping the tendon, but her adrenaline overshadowed the pain. The alpha mother howled at the faceless moon, feeling cheated of her quarry. The tomcat slid backwards in the labyrinth hole to hide; normally he stayed to watch until the first teeth sunk in. When he heard the howl, he knew the female had gotten away, or was trying to, and for this he was relieved…

…and if we were little children listening to this tale, we would naturally wonder if the boy cat loved the girl cat. He never told her. He played with her, teased her, and stayed close to her. And a million females ask that question from time's beginning: did he love me? And the moon never answers back, so we need to be satisfied with this, too.

…his relief grew greater, and he grew bolder, and he came out of his hole and yowled at the wolves, to divert them away. He tore past the baying wolves, and they gave chase. Wolves chose the easier prey, and left the cat up with the crows until she dropped. Mrs. Whitworth saw the alpha rip into his left flank, the side she never saw. More running paws, but the yowling stopped, as did the slobbering wolf breath. This was past midnight, onto the witching hour, when the sleep turns sour and the watchmen stop laughing.

She stayed in the tree all night. Before dawn, two arms reached up and carried her from the nook of the tree, wrapped safely in a blanket, and taken through the portal once more, home.

Epilogue, of sorts:
Many weeks later, and a missed faire in between, (going back served no purpose), Mrs. Whitworth gently bit her kitten by the scruff of his neck, and found purchase in a warm lap, near a hearth, and room for two.

*Mr. Snerguls warned me against this, but I can't help myself: 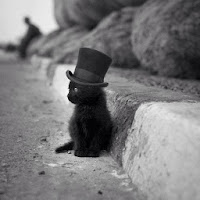