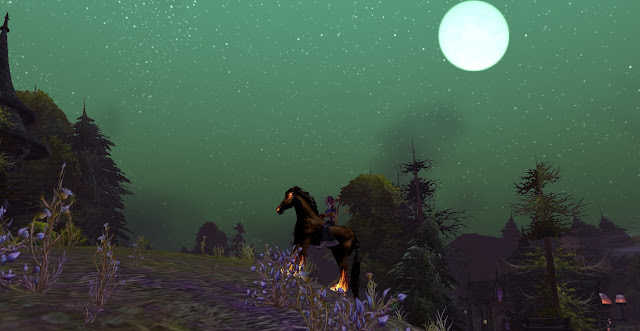 Her father kept horses, and his stables were renown in the Eastern Kingdoms. The breed line included sires and dams from King Terenas Menethil’s own field.
For her 13th birthday, a chestnut gelding with a crimson bow was presented to her. She thought ‘Diablillo’ suited him well, but his breed lines dictated his name be Lucky's Hand Lady Jane Shadowfall of Darkshire. Her father ordered her to call him "Lucky." He was very strict in adhering to tradition, and maintaining order. Escarlata was furious. She knew the horse would never sire any of his own foals, so what did it matter? She called the horse "Lucky" when her father was in earshot, but gave him sugarcubes and whispered her secret name for him in the horse's ears. (The horse didn't care what she said, as long as the sugar kept coming.)
She wished he were there to see what she had become, after she had been undone by the Lady. What would he think of her Felsteed, and equestrian mastery? This mount was no little girl's gelding, and she had no fear.
Would he be proud of her? Or terrified?
The plague killed him. Ate out his organs, saving his sweet heart for dessert. He was not chosen to be among the Forsaken. When he fell, she was not the one to cannibalize him for survival at least. His body and bones were gone, she did remember that much. Perhaps the cook? The squire? She shrugged.


Her feelings of regret dissipated like candle smoke. Time to ride on.