Matty gently coaxed Morphemia out of the shadows..."My sweet little death knight, I realize you faint at the sight of blood and always have a runny nose from the chill, but please...come out and play..."

Well, good things do come to those who wait. 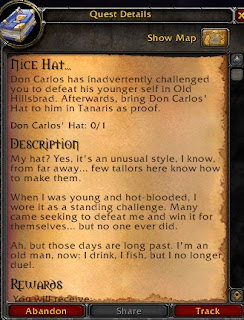 Morphemia the Maladjusted went from a steady level 74 to 75 in a heartbeat. (You need to understand, this was after she sat for months at 74.) While leveling up on inscription, she made some Recall Runes, which is like hitching a ride on a small tornado - you just never know where you'll end up. This time, she landed under the house with the Wicked Witch of the East.
There she was, just getting sand out of her, well, chinks in the armor in Tanaris, hanging with Don Carlos discussing celebrity millinery wear, when a shock of red light doused the evening sky.
Could it be?
Yes.
Faster than you can say "habañero," the fires swept through like a gasoline alcoholic with a lit Camel cigarette. Only one or two other characters have survived the fire, and for this happenstance to occur for the death knight is truly a testament to the power of the RANDOM NUMBER GODS...boom boom boom...they roll when they roll. 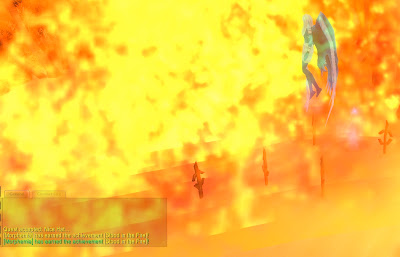 And of all of my brave little goat and elf girls, the death knight has by far shown the best on battlegrounds. It's like she was born, or reborn, for it. Keep it up, girl - you're on fire.
Where do you get that hat, anyway?
Postscript: But the happiest thing - so glad to see my long-lost friend back in the world, even if it's temporary. So glad that sneaky rogue girl didn't fence all of the guild contents. Señor, I needed those potions tonight while healing a heroic dungeon. You're always there, just in the nick of time. Gracias.
Posted by Matty at 10:40 PM