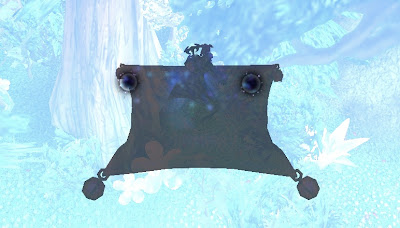 Don't go into the light, Zeptepi!

She reached level 80 not too long ago, knowing that all bets were off as far as healing in Cata dungeons: her wardrobe was threadbare, patched, and a bit shabby. The time for questing in Mt. Hyjal had arrived: building her reputation, building up her magical armor, and going back into the shadows was to be expected. What was not expected was the fragility of her shadow priest skills. She has more holes in her intelligence than pantyhose on a prom date.

During one quest alone, the beginning ones, she was blasted to smithereens no less than four times. There is gold in the bank to buy her some new school clothes, but there is nothing worth purchasing before level 82, and at her rate, that make take her some time. It is a challenge to go from swinging axes and maces to using the forces of good and evil to smite villains.

As I have done in the past, I am going to look over other players' (well, one actually) customization of their shadow priest to see how they've done it. She needs some supernatural aid right now, so if anyone has something to say, a bias, come out of the ebonweave closet and please help a girl out.

In the meantime, I'll just keep dying and trying in Mt. Hyjal, and need to read The Girl With the Dragon Tattoo before the movie comes out.

Postscript: Duh. Just do what everyone else does and go fight some battles for some PvP gear. It's fun to be a SP in BGs anyway.
Posted by Matty at 7:02 PM