I am hesitant to tell this story, it's slightly mortifying. But -- here goes. An anecdote to cleanse the palette before the main-course post:

So, I was hanging out in Dalaran a few weeks ago, struck up a conversation with a very nice young man. Friendly, light, casual - you all know I'll talk to a fence post if I think it's listening, and Matty, Thy Name is Extrovert. Says so on my driver's license. Anyway, he had some accomplishments in the game, and wanted to share them, and look over gear, etc. Of course I had to make the conversation awkward by saying something bawdy and silly (he does not know what an accomplished limerick writer I am). I totally embarrassed the poor guy! OH NO! I told him that I am a happily married lady, all is well, all is happy, and I am so sorry if I embarrassed him (it wasn't that bad people! Sheesh!! Get your minds out of the gutter!). His relief was palatable, but my standing as Socially Awkward Penquin is now set in stone. 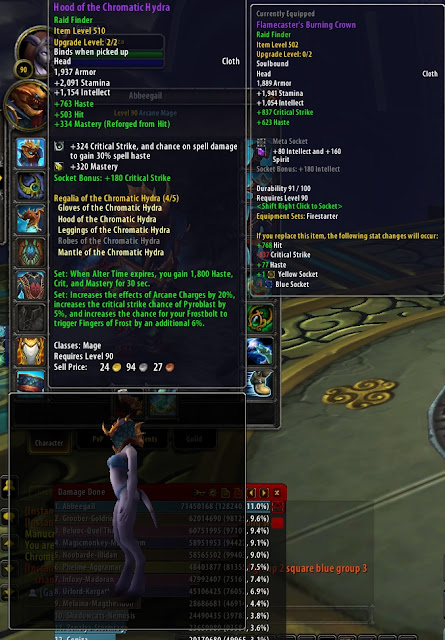 The thing is--I am not really looking for too much in Azeroth right now. I have the friends I need, my real life is pretty damn awesome, and I feel that I can give the time and attention to my friends in Azeroth and support them in whatever they want or need too. I took Ceniza into an LFR today, and it really hit home --- there was a mage who was easily doing 112k, and I looked over her gear, and of course it was all from heroic and normals. I struggle with obtaining gear, this is well known. Extra rolls, lesser charms, time and energy, for hundreds of sacks of gold and a "better luck next time." But it doesn't  matter. This is a homage to my little cottage guild that my friend Señor and I have built: three years of friendship, no demands, or stress. We both get a little thrilled when we see that the guild level creeps along, and he's put me in complete control of it. It might confuse the young man I mentioned that my friend is not my husband, that it's totally okay to have friendships in Azeroth that you don't need to explain or justify to anyone else.

My little cottage guild is a happy, healthy place. We do LFRs, old stuff, and I level alts. Lots and lots of alts. And while many players have been writing about the upcoming changes to 5.4 with Flex Raids, I am not sure I'll even be a part of it for better or worse. I am plateaued at LFR: LFR has never been a threat to "real" raiders, or "real" guilds. I am in the enviable position of not having to worry about it now. I'm not going to join a raid team, unless Xak comes back, so that's done. No one is in danger of having me derp up their boss kills. The point is: we all can play the way we want to, except -- when we can't. We are never fully in control over how others see us.

But these past few weeks, here's what I've learned -- no matter what, I will never be a completely solo player either. Ever. I can't do it alone. I have longed for many a play-hour that more partner quests/guild building activities were available. If I had my wishes, they would be to allow everyone to have level 25 guilds easily, bring back Have Group, Will Travel, (NOW) and make it easier to get gear. Yup. I said it. I know Blizz made changes, but I am still bitter. The raiders are going to raid, because I do know if you get on a fun, good team, nothing slows you down. Every day in Trade Chat are players desperate to run something, do anything--I wonder if sometimes we've created a monster of loneliness out there, waiting to devour social engagement of any kind. Personally, I'm not extending myself out there too much. The afternoon Buffet for Trolls is not a pleasant feast. Besides, I don't want to embarrass any more druids!

Oh the hell with it - he gets a limerick:

anyone want to finish it? ....something about she was sorry she showed her rear? No? Lost my touch.

My community, my passions -- are with my blogging community. No matter what, I circle back to you all time and again. Can't say it enough.

So, to Señor---gracias por ser un amigo leal y de confianza en Azeroth. Now go buy a guild standard to help get us to level 14!
Posted by Matty at 2:58 PM