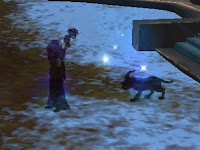 Look, girl, I'm a panther! I am no small beast, I am fierce, girl! The girl had difficulty hiding her smirk. One false move and Mrs. Whitworth would strike claw in flesh. A magical treat expanded her size but it was a tenuous glamor, false girth that only empowered the cat's hubris. The girl regretted it, but the cat, well cats don't feel melancholia, do they? And she was only trying to cheer the creature.

I left her many an unwelcome gift. She promised I could fight she did she did she did and all that happened was shaky hopes and neglect, neglect and dismissal time after time. But look girl! I am no small beast, I am fierce, girl! I will leave another 'gift' in the clean laundry. And another by the door. A scratch on the silk chaise. And one more. She does not notice, she is gone, she is gone gone gone all the time...

Ignoring cats is how one drives them insane. Might as well be direct because there is no magic in it. Mrs. Whitworth had the painful honor of knowing a tomcat whose lessons included how to get revenge on one's feeders. They were not masters, nor were they keepers, but the feeders, the ones they had tricked into keeping the fires warm and the meals plentiful. The hearth was always warm, and the food filled the dish, but she was often gone. The old tom was sent to a farm after one too many of his special brand of gifts, though, so Mrs. W had to be smarter than he. That shouldn't be hard to do, stupid tom. But cats may not show despair. Pride comes before a fall, and when a fall requires landing on all fours, the cost of ego is doubled. To save face and whisker dignity, Mrs. Whitworth would have to do something that she herself did not believe she was capable of: being patient.

When the mistress began being more absent, at first she roamed the shadowy corners sulking in misery. No longer did she feel she deserved the sun's warmth through the south side window, or the loving hugs of the hearth. Self-pity with one so arrogant is a stronger curse than those more sensitive to their own emotions. But if she were to get the girl back, she would have to move and fight her way out of this sorrow.

First--stretch.
She dug her claws in the spongy, tattered carpet.
Roll back.
Arch
move like an ocean wave
fur
static and crackle

Mrs. W knew the moment of honesty with herself was long past. The spark of electricity from her dry fur and stretch shocked her, and her epiphany rung as true as a funeral bell:

I always think too big. Need to start smaller.

First order of business: the nest of disagreeable mice must die.

The patriarch of the nest was a vicious rodent by the name of Montague Misandorque. His kitchen informants had told him Mrs. W had been humiliated in battles time and again, scorched like tissue in fire, and the girl had put her aside for stronger, more agile beasts. Her ferocity diminished, his boldness increased.

Ah, underestimation is the first misstep of many an arch enemy.

One evening while hungry for some lemon cake (for his bravado in culinary pursuits had climbed upward of any moldy crumb to specific delicacies in the kitchen; not having to worry about Mrs. W, he leisurely took what he wanted from the cupboards and bins), he still gave a modicum caution to the night terrors that could snatch up even a fat mouse such as himself. This was no ordinary lemon cake, with orange cream frosting and little sugar pink rose petals, was a powerful antidote against January shivers. It seemed an incongruity to have something citrus this false-faced time of year, looking too far back to summer and too far forward to spring, but perhaps it was the perfect cake.

He skirted the baseboards, climbed the dishtowel, (the one embroidered with the two kissing gnomes), up behind the flour sack, and to the cake box, and began nibbling in a discrete corner. If he nibbled on the gold filigree imprint of "Aimee's Pastries and Cakes" the girl would surely toss out the entire cake. Nibble nibble nibble, the smell of the orange cream and lemon zest intoxicating. He never saw it coming.

Mrs. W crouched behind the lard tub, and watched the greedy mouse spoil the mistress's cake.

When his fat little face burrowed into the third layer of heaven, leaving only his knotty tail exposed, Mrs. W carefully carefully carefully crept to
the
tail
and with
one scalpel claw
pinned
Montague to the counter.
He left some mouse turds, but the rest of him was

Mrs. W pushed the cake on the floor so to protect the girl from mouse germs and disease, even though she knew she would be scolded for one of her revenge tactics. But no matter. Her behaviors had been awful, and the taste of lemony mouse tasted all the sweeter for her own self feeling whole again.

sat her little cat hat on her head, and set off to find the girl.

What she found was a smiling tower of flames, a kind demeanor with death all around. Beasts were beaten bloody. Dragon wings in shreds. Small amphibians and reptiles dry and deserted. The girl looked at Mrs. Whitworth, and having nothing else to lose, decided to give the cat (who sat on the grass nearby, nonchalantly licking a paw) another chance.

sat her little cat hat on her head, drew down the night, and bested the mightiest of foes.

All with a flick of her tail.

Editor's Note: There are those odd moments, well, perhaps 'odd' isn't the right word, but those moments in game where the magic happens --the moments I think in our hearts we know why we really play--I started pet battles because the role playing/fictional aspect of Mrs. Whitworth "told me to." But in all honesty, this pet really has a glass jaw. It wasn't long before I stopped using her in the line up. And I thought, her character would be so heartbroken, and well, pissed off! But after weeks of pet battles, when it came time to beat the last one in Panderia, it was Mrs. Whitworth who led 'me' to victory. I really don't know much about stats, configurations, the rochambeau of pet battles. I did get a kick out of every time she did win something, she would nod her little head one time fast, as if saying, "Hurrumph! Got you!" but in losses, squeaked the cat howl like no other. Mrs. W is the reason why I completed this part of the journey, like rescue from without.

And now you want lemon cake, don't you? 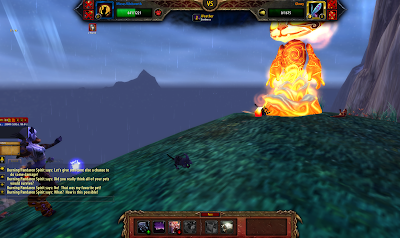 Theme Song: No New Tale to Tell/Love and Rockets