One of my favorite movies is "Nightmare Before Christmas." There the expositional scene where Jack sings "Jack's Lament," about his boredom, ennui, and otherwise loss of love in his work. I preface this post with that because I don't want anyone to--judge? Scoff? But I'm thinking about seeing what happens in the RP part of MMORPG. Yes, I know what happens in Moon Guard in Goldshire. Things with--unspeakable things. Things I can't un-see.

Another mentor told me about My Role Play add-on. This is a screenshot from a player's in Moon Guard I took on a tourist visit there. Not sure about the back-tat, but hey, not my alt: 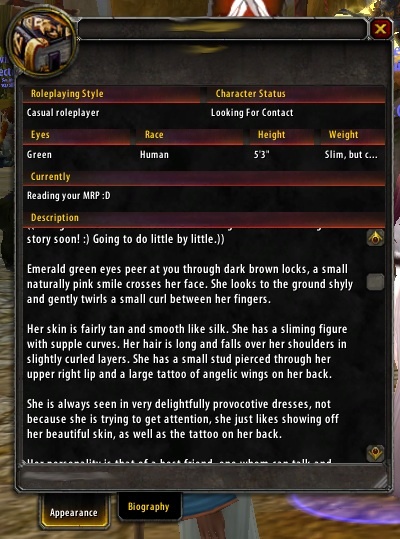 It was fun to click on player's storylines and just read. Think about it - all of our characters seem to have personalities of their own, why not give them a backstory, like the NPCs have? Now I'm not sure how far and wide I'll get into this. I like writing my little stories and posting them on this blog, and that's maybe where my writing will stay. I do know more research is necessary to understand certain trails of lore. One of the most well-established resources on role play is Too Many Annas.  (And it has long been my theory that Tome of the Ancient is on everyone's blogroll, and Anna's is no exception. Everyone's. Tome ---you're awesome!) Anna's blog is as well-crafted as her expertise, and the comprehensive list of resources is a great place to start.

Those who know how much I love to write may be thinking, "What's kept you so long!?" The answer is complicated and simple: let's go with simple. I don't want people to think I am the character. Period. I want the freedom of anonymity of writing to be real and raw, and not know who is behind the screen, or second-guess me. Stories are stories. Yes, I think all writers use their own experiences to weave and quilt threads in a narrative, but like the young lass above, I don't have any back-tattoos, and I'm not 5'3". She may be in real life, but "she" also may be a 54-year-old divorced cab driver who loves Edwardian literature. Point is, it doesn't matter. In Azeroth, since the rules of RP are clear (and some would argue a bit Draconian), he can be who he wants to be.

Where to next? Not sure. Most likely crafting Mataoka's, Zeptepi's, and the rest, stories for those with the add on to click and read. That's the beauty ofAzeroth: so many interesting things to do, and people to meet. What could go wrong?

*I am a little concerned with the player's "sliming" figure. Does it leave a stain?
Posted by Matty at 9:25 PM