This is what happens: I play my face off, take way too many screenshots, and then neglect, gee, I don't know, brushing teeth and laundry. To solve this issue, I have a legal sized notebook pad and clipboard next to me (you think I spend a lot on Azerothian accessories? You should see my Office Depot receipts. I love me some glue sticks!!), and on said clipboard is a list. A mighty, mighty list. I shall cross these things off with a golden pen which drips ink from the Kraken's arse and a choir of angels shall sing as I get things done.

Overall, this has been a most pleasant weekend. There have been some bugaboos. Yes, Tome and I were discussing the low spawn rates of things, how unbalanced it all is. I've been saving this image for just such an occasion: 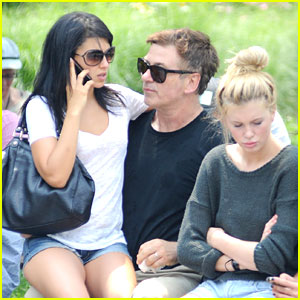 This is Alec Baldwin and his second wife, (or third, not sure), a yoga instructor, on the morning after their nuptials. The pouty young blonde is his daughter with ex-wife, actress Kim Bassinger.

See that face? Do you see that unhappy little face? The crossed arms? Alec is happy. Why wouldn't he be happy? He has a hot yoga instructor on his lap. She may even be younger than the pretty Ireland Baldwin. Not sure. Hilaria? The yoga wife? She seems happy, too. Probably talking to someone about something really important, actively ignoring her new step-daughter. This trio of archetypes is a tableau for the ages. So, that cute pouty face? My inner face when I hear of spawns galore on other servers.

However, I really have nothing to complain about. Krasher took his healer into the Lost City, with one other DPS who followed instructions to the letter, and I finally finished my Cataclysm Dungeon Hero, and a shiny new volcanic drake was mine, all mine! And, I finished my exalted reputation with the Klaxxi today, those little thorax twiddlers, and not only did I earn thirty-five exalted reps (it was my 35th one), but my 25th tabard, and received my Achiever Tabard:
And now I'm tooling around on a hot new scorpion mount. Even has cupholders.

Loves me, love me not

I suspect Tome's theory on the forum bitching may have some merit. It does seem awfully odd that Blizzard works so hard to make its players happy, but then always has to add a zinger or time sink. Know how I know Blizzard hates me? Bag space. CRZ. Camping asshats. Dailies. Too many dailies that require collecting shit that takes up bag space. See the problem?

But you know how I know Blizzard loves me?

He is in the game: 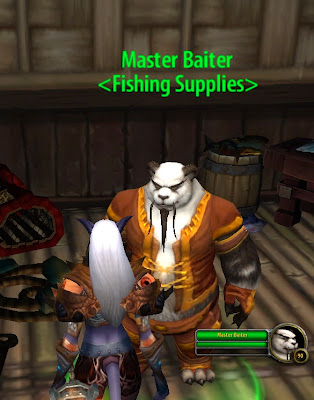 I'll leave you for now with that image. You're welcome.
Posted by Matty at 10:50 AM