Word of the day: gruesome

Oh boy, this is so cool! I received over 20 entrants for the Movie Mog event - I'm going to switch things up a bit, and I'll be working on the post later this afternoon. Stayed tuned, boys and girls!

In the meantime, I wanted to share some "real" news, not just infotainment; there are a few things that our intrepid girl reporter, Mataoka, has noticed around Azeroth.

First, a warlock she knows, Kaajinn, went deep into Horde territory to gain the trust and love of a great guild. Yes, it was all for a pet. Those of you who love pets know that going from zero to hero in a few days is worth it, totally. Part of gaining guild reputation includes checking in with the ultimate emo chick, Sylvanas. More on that later. What concerned her is WHAT THE HELL IS GOING ON HERE? 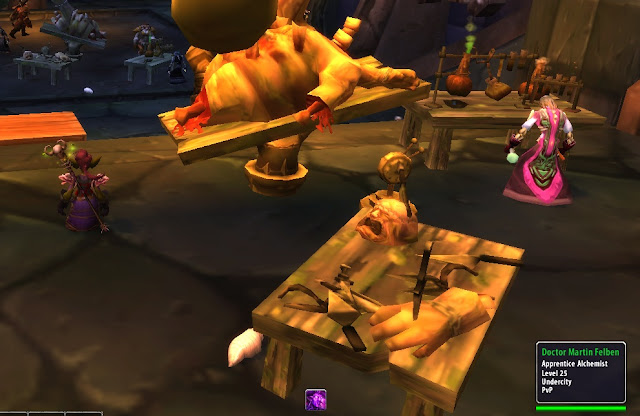 Another doctor, I see! One Dr. Martin Felbern, with questionable credentials, in the Undercity, doing gods-know-what to these body parts. But--must say--his robe is to die for!

Please don't think I'm picking on Horde for gruesome acts, oh no! The Alliance is, well, a tad abominable in their definitions of 'war trophies:'

There is an unfortunate photo-merge in this shot: the hook you see in the dead ogre-cum-throw-rug's mouth is on the end of Agent Malley's staff, and not in his mouth. Mataoka tried to get a decent angle, but using her spy camera tucked in her fanny pack, was not able to get a clear shot. But yes, that is an ogre rug, skinned, tanned, and furry, on the sandy floor of the quartermaster's tent.