Tome led me to Euphyley's post about the big, green fightin' machine hunter pet, Gorishi Grub. The directions were clear, and very thorough. Because they were so clear I still had a few mishaps, because you know, the day's not complete unless I'm at the dentist and miss the little plastic cup to spit my fluoride and spit in my lap. Yes, I would rather tell people I wet my pants than that I missed a little cup right next to my mouth.

1. Because Tome accidentally killed the spawn and warned me not to, I had to do that, too. But another one spawned about 3-4 hours later.

2. I was sitting on the floor doing some work, glancing up at the screen every so often, when at one point I noticed a Level 90 Horde Death Knight of indiscriminate race taunting poor Haanta, doing the chicken emote, spitting on her, etc. in that tiny cave. So of course, Haanta /loved him, and /kissed him (turn the other cheek, I guess) and he /licked her and left. After she wiped off the Horde drool, she wished she had a mouthful of fluoride right about then.

3. Euphyley warns us all not to kill the Clutchmother, and she probably told us how to not to do this. However, I only looked at her maps and the one warning, because I did not anticipate that once tamed, I forgot to make it passive and it turned on its mother and siblings and quickly disposed of them. I am not sure I would have had time to even turn on passive mode, the carnage was swift and complete.

Now where's that Death Knight? I've got some fluoride for him...you know, to prevent decay...

So, here he is, in all his luscious green glory: 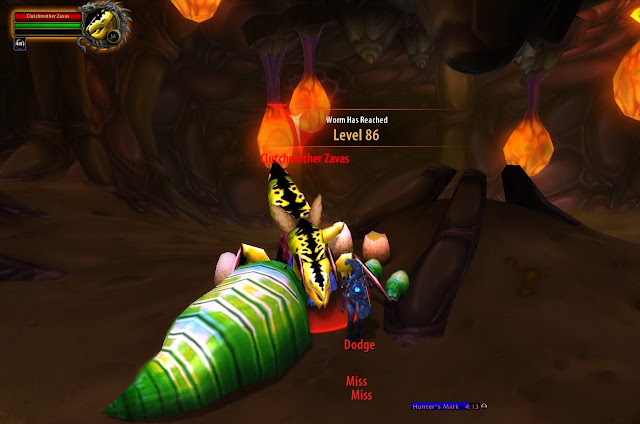 The best part about this pet is he stays large! How cool is that?
Posted by Matty at 5:37 AM