Recently an exceptional Druid tank I know well confessed considering moving to another server. The population of Whisperwind has declined, and though the traffic may not be as congested (I am still quite frustrated over the loss of portals), his thoughts being, with a higher server population finding raids will not be as difficult. He is, first and foremost, a raider. Questioning his blood lineage, (perhaps there is some Vandal or Viking in there after all), this is extremely important to him, and he has the play skills to back him up. He currently belongs to a large raiding guild, and has done his share, but is not enough. (He also shared his opinion that female players, once in awhile, tend to be, and he was VERY diplomatic about this, not...quite...the...same as their male counterparts. Raised eyebrows aside, his example from a recent raid also had me considering again male/female play styles, but I've already covered that ground.)

Going over the list of servers that are available to start new characters on were too many to waste time counting. As we all know, the RP/PVP/Normal and population concentrations run low to high. Mat's put down some earthroots in Whisperwind, and has no intention of leaving. But this does beg the question: what makes people choose the servers they do, and why do they stay or go? The transient masses move for a variety of rationales in the real world, so it is probably true in Azeroth as well: there are political, social, emotional, and professional reasons to put a For Sale sign on the drake and head on out.

Would be interested to know your thoughts. And let me know if you need a good real estate agent: there's a Blood Elf in Sisters of Elune who has dirt-cheap property, a mansion just listed in Deadwind Pass. 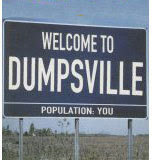 Email ThisBlogThis!Share to TwitterShare to FacebookShare to Pinterest
Labels: servers, welcome to dumpsville