There's an old expression: when all you've got is a hammer, every problem looks like nail. Or something like that. Luperci, of the Tanks of Little Patience guild, has made it to Level 50. I bought her a new can of armor polish and a shield, because this:
She's been running through Blackrock Depths and Zul'Farrak. Whispering to the healer today that he was doing a great job, and the defensive healer responded by telling Luperci to shut up. Quizzical, she said, no, really, no sarcasm. The healer, lacking trust (perhaps it was because Lupe was lying face down in the mud next to a boss in Blackrock), cautiously said 'thanks.' Has it come to that? Are we all so rude to each other that when we are kind or polite our instincts are to knee-jerk a huge "ur a d*ck?" (And not a duck. Trying to keep this PG-13 people, without a lot of success.) One mistake made was when the DPS's were critiquing Lupe's play style, and someone kindly said "naw she's doing good." Why did that seem like the right time to show that she was top in DPS damage? Perhaps not the best timing. Recount = shame & sadness. Perhaps that is why when they fought the boss the DPS pulled the mob group to themselves (even though she said not to) and left her and the healer on their own to fight him. They ended up killing him anyway, even after Lupe pulled the boss to the side for a quick and easy kill. She'll watch the post-game videos later, but in all honesty, is not really sure what can be done to improve PUGs when they're that full of, um, d*cks. Except for the healer. Who later got in a fight with the hunter. /sigh

Oh well. In any case: she did get these new leggings, (Lavacrest Leggings) which are stunning: 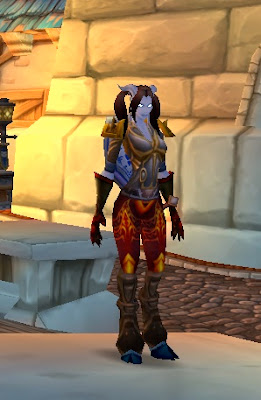 From the trolls she got a Shriveled Troll Heart, although the hunter tried to tell her that (even though stamina and strength were its attributes), because it had a hit rating, a tank couldn't use it. Did I miss something? Luperci is going to need all that strength and stamina to make it to level 60, and then Suicide Ridge, I mean, Hellsfire Peninsula. It's an item level 49 item with strength and stamina. Hammer and nails, baby. I know hit is great for warlocks and their ilk, but was thinking it'd be pretty cool.  And her sugar momma bought her a new shield. She is covered in head-to-toe in plate armor, including heirlooms, so look out d*cks. You all look like nails now.