"I solemnly swear that I am up to no good."

For you Harry Potter fans, that quote is probably tattooed on your chest somewhere. I know mine is, albeit it's backwards, on my forehead, and invisible to everyone else but me.

So what my totems don't also serve as beer kegs? So what? I know a few Dwarfs who'll buy me a round or two. I have friends in high, and more importantly, low places.

Take my friend Chap for instance.

Yesterday I told him I need to go shopping for socks. I hate shopping. He said, "That socks."

He was attired in that creepy rogue mask thing, and I told him he looked great. He told me I should try it. Since Ceniza was on deck, I could, and did! 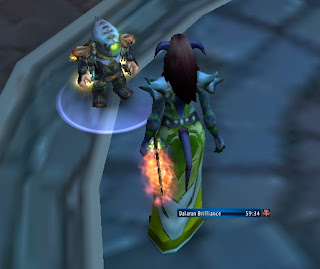 Being a mage is grand fun, that exceeds all expectations. One cannot possibly take oneself seriously as a mage. Think about it - our main abilities include fire: skaboom! Ice: when the frost minion is on downtime, he mixes one helluva martini, shaken with his own ice cubes, not stirred, of course, and arcane, which is the essence of magic and light. Arcane works kind of like magnets and Thermos- you don't know how, but it does.

Now Zep was trying her wand at some battlegrounds yesterday, and it is commonly known that Shadow Priests enjoy a grand skirmage or two. She noticed this guild recruitment advertisement in Trade:

(I think I've noticed this one before -but like any good advertising campaign, needs repeating.)

Now, since she is the official jefa of her guild, and Kellda is in a friend's guild, and Mataoka is on a 10-man team, no one is running off with Aegon and his funny crew, but damn - THAT is a guild ad!

So if you're feeling down because Voldemort is after you, or Arthas won't return your calls, or whatever, remember - keep making mischief, and all will be well.
Posted by Matty at 6:10 AM