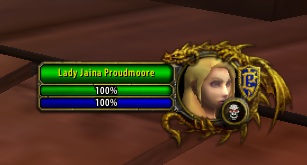 I'm still musing over the Blog Azeroth suggestion about 'headcanon,' since that is essentially what all of my fictional writing as been pertaining to in this blog; the stories and drabbles that venture far afield of what the 'real' writers of Blizzard/Azeroth produce. I am a lore noob. I don't, and haven't, paid much attention to it, surely causing fanboys and girls much distress with my hubris. But there is an upside to my noobiness: I get to write what I want, and learn new things. (Heck, I can't remain a Philistine forever, peeps!)

As we careen off the peacetime cliff of relative stability, enjoying the tolerant, and sometimes cordial relationship, between our two factions, I felt it was time to do a treatise on the archetype of the Mother. I have always had an affinity for Mother Mary, and other strong female spiritual representations. 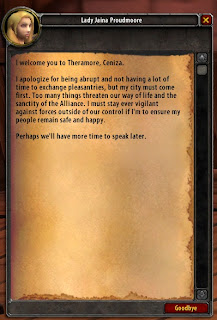 Jaina is a "mother" figure. Now, admittedly, it is entertaining to poke fun at her, and if you're on the Horde side, grand fun to destroy her, her and her goody-two-shoes ways. Though she has no children of her own, she is always mindful of her people, and her duties to care for them. She sacrifices her own heart for her one true love, giving herself to the care of the good citizens of Azeroth (at least for the Alliance) and tries to stop bad-boy Arthas from his evil ways. We all love Lady Sylvanas: she's dark, emo, and wicked. It is much more fun to play the bad girl. But it's the mothers of the world, the Jainas, and the Earth Mother, who try to comfort us in times of pain, and remind us to 'play nice.' And when we can't play nice, they are there with bandages and comfort.

Tragically, mothers can only do so much. It is often said if mothers ruled the world, there would be no wars or bloody conflicts. I am not sure this is true or not. It feels true, but mothers are pretty damn powerful, so why don't they stop things? Why is that the mothers clean up the messes, but don't make them? (Hey, I do know plenty of broken mothers who raise broken kids: I'm not referring to those heartbreaking stories.) It may be because the other piece of the equation, Children, we need to learn our lessons for ourselves, no matter the pain or consequences. Just because our parents can see around corners doesn't mean we believe them. How boring would that be, to heed every piece of advice your mother ever gave you? The only one worth a damn is don't wear white shoes after Labor Day.

The upcoming events in Azeroth feel foreboding and menacing indeed. Even the cross-realm activities have heightened my awareness. Just yesterday a Troll hunter pulled a pack over to my warlock Kellda, which promptly ate her face off and took her minion's lunch money. Things are heating up, and if you want a glimpse, you can go to Vidyala's blog, Manalicious, and good-'ol Warchief's too.

Vidyala wrote a very comprehensive post on the upcoming events, and if you complain of spoilers, you had best check your reading comprehension, because it is not like she doesn't warn you!

I have a very dear friend whom I've known since we were four years old. She lives, and has lived, in New York City for over twenty years. She wrote on Facebook yesterday, "It was a clear, sunny morning just like this one."

I much prefer my wars and conflicts fictional, thank you very much. Maybe we "mothers" and Watchdogs of Azeroth  can keep it in game, and not in the real world.

Theme Song: Let It Be