...or: "The Cultural Misadventures of a Kaajin the Goblin."

This one's for you, Navi.

I know a goblin warlock, a beautiful green-skinned darling named Kaajin. She had an unfortunate smelting accident while making bolts in the Dwarven District one afternoon, and when she awoke from her coma, she had turned from a human to a goblin, the only permanent side effect. Interestingly enough, she managed to make the most of it and immediately purchased a crab that seemed to make her Alliance brethren happy.

Knowing to stay off the mean streets of Orgrimmar until she got her bearings, she decided to perch in a hotel for a spell. This one didn't have has many blood splatters on the wall or Forsaken warriors haunting around named Ibwa chewing the fat and the customers, so she determined its relative safety. After all, it hadn't been all the long since she was a human, and only had to worry about fending off cheeky, butt-pinching gnomes (oh yes--do not be fooled - gnomes love to pinch human female bottoms...) or churlish soldiers. Content to blend in with the crowd, until gold and glory called (which due to her newly minted goblin protocols, would not be long).

Demonology was easy. She thought, sipping a cup of gods-know-what, (the barkeep had a don't ask, don't tell policy on ingredients), why not stir up the pot a bit and try her skills at Affliction? It seemed intriguing...all pustular, pestilent, and pulchritude of pretty spells. One in particular seemed interesting...wonder what it does? Howling Fear...oh, this could be fun! "No one in this place will hear me," she thought, sending out waves of silently deafening horror.

As her jaw was beginning to form a smile from the joy of the howl, and before her head was back to a 45 degree angle on her shoulders, a looming, hairy form pounded her into the ground. None of the patrons gave it a second glance. She was dead. In her spirit self, she was bewildered, confused--how can this be?! I am among friends, aren't I? Why, why did someone else slaughter me like a plate of half-priced Happy Hour nachos?

A lumbering Tauren sat, drinking his ale, a bit more sweaty and steaming of irritation in the corner.

She ran back to the bar, retrieved her broken bones, mended them back up, and lived again.

Because she came from human origins, and humans are not always as shrewd as goblins, she tried it again. 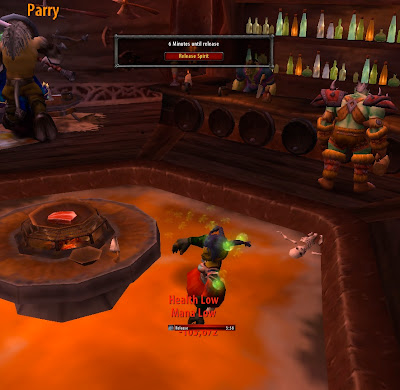 It takes a lot to mortify a goblin. In fact, few of us would want to know what. Our human imaginations cannot do the math on this one. She did not run back this time: she knew the freight train's name who had run her down like a sheep on the tracks: Gamon. She heard sniggering in the corner from a group of Blood Elves. Her skin went from green to beet red, but she pulled her cowl over her hair to hide her anger and embarrassment. She stood next to him in the bar. He did not look at her; he just drank his ale. 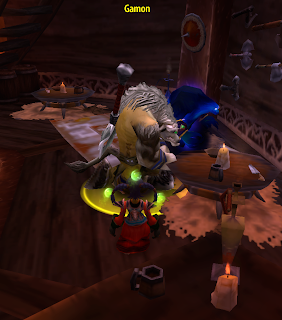 She decided to just leave him be.


Editor's Note: Further research on the outlaw Gamon shows that no one is safe in his presence. He is not a low-level NPC, but an elite. Maybe because of Kaajin's stature she did not notice the huge, shining gold ring around his name with blood-red number, "85." But in all the years on the Alliance side, there has never been an incident where an NPC in the same Inn has been so deftly deadly. Oh sure, there's the occasional brawl with a cook-cum-cultist  for the Valiance Expedition, but whatever. Never met anyone like Gamon before, and plan on keeping a wide berth, and not throwing out random Howling Fears in his presence.
Posted by Matty at 6:08 AM