Siege of Orgrimmar is tough, even in LFR. I love Flex cause I am there with people with good communication skills. And stupid me, I thought, maybe, just maybe one more time before roll-over on Tuesday, my poor little druid could get a better healing weapon, and then I'd put Zep to work with enchants and Momma Matty to work with some gems. Get her all dressed up for the ball, you know? But alas, the evil stepsisters tore it all to hell:


And, the RNGs do not love a druid named Momokawa.

[I am slipping into third person voice as a Gestalt-response to recent LFR trauma]:

Momokawa is so beautiful, so fun, but damn that girl cannot get a break with a healing weapon. Consider running every LFR, doing every free/bonus roll, and the only one she has is the staff from the big puddle boss thing who squeaks. No gem from Dragon-boy - just lousy with all that. And her human is very, very busy.

And
And
And apparently out of gold from all the repairs bills from Timeless Isle and other LFRs. No joke.

Why I thought I could run one real quick before going to the store, I'll never know.

First of all - the players do have a point: I do not have items enchanted or gemmed, because I am flat broke. This is the last of the screenshots: 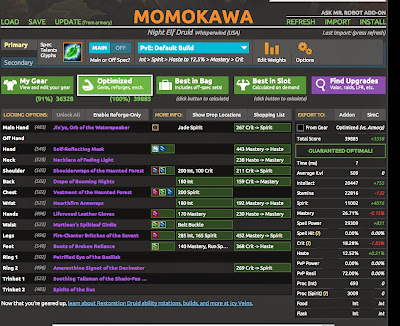 But it started with this: Zoning into the Dark Shaman fight, and Spacetwinkie started some shit: (scroll to bottom)

Spacetwinkie first says to me "Let's kick Momokawa and get a real healer" because the group wiped so quickly, it wasn't even funny.

Now, I'd love to think I single-handedly can control the outcome of an LFR. Wouldn't that be amazing? I could save everyone, kill everything bad, find a cure for cancer and lose those last ten pounds. I COULD! Don't believe me? Well apparently the lack of two meta gems stood in my way of saving the world.

Do you notice their "air quote" quotes in his response to me?

And to be fair, Junniper joined in the conversation and they started a "shaming the player" conversation. They would NOT let it go. They only time they shut up was after the tank pulled the fight timer.

Well of course we wiped again, so fast, and upon death, these were the stats:


BUT NOTICE Space's Item Level - 540!! Compared to my 509! NO WONDER! How dare I pollute Azerothian highways with my realiable junker while he sports an Escalade? His blaring horn blasts: MOMOSUCKS to one and all...tire marks on my poor back.

In fact, every player above me had a higher gear score. Rixxii didn't say a word, Ellana kept her own council; only Junniper and Spacetwinkie needed to shame me.

Now, I had just spent hours - and I am not exaggerating -- hours in there on Kellda. Wipe after wipe, and all dps low, all heals low, everyone just trying not to die by the barrage of garbage Blizzard has thrown at us. I am dubbing the new fights the DBM Battles, cause if you do not have Deadly Boss Mods for this patch in particular, you are screwed.

Well, damn - guess what? I DO feel better! Well, in one aspect anyway. And I don't really want to go back to the old loot system; I just want a better way to get things I need. No one needs the Spacetwinkies and Junnipers of the world to shame or call out. It doesn't make me, or anyone, a "better" player -- I have the defenses of my blog/words. What I worry about are those folks out there who don't have that, those inner-shields of confidence and GFYS's. (Go...Flip...Yo...Self)...

Someday the RNGs will smile upon sweet Momokawa and grant her the gifts of the gods. But for now, she'll shamble over to the grocery store to pick up some sake and orange chicken. Ah, Space, if you only knew how awesome I am in real life - say it to my face, coward.

Postscript: Many of the healers were missing gems, too. If only that was the only problem in LFR.