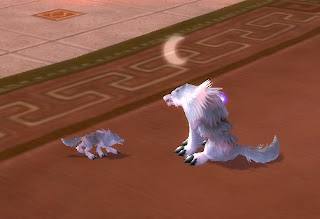 I can imagine what kind of traffic I might get with this title, but oh well. Living on the edge, you know?

So, sometimes in the cost-benefit analysis, you just gotta say eff-it. There are three ways to get what you want in Azeroth:

1. Win it through happy-shiny-RNGs-love-me-love-me-not-love-me again
2. Have a friend give it to you
3. Buy it

(Hmmmm...sounds a lot like something else I can think of....too early, Matty!!!)

Anyway, because Momokawa won the Darkmoon Eye so quickly, she sold it, for far too low (I am embarrassed at my lack of AH prowess), but got a little sum tucked away. Matty's alts did some bank reconstruction work for her friend Turk, and earned a nice dividend. Okay, okay, seems fine. But this morning after the umpteenth Den Mother hunt, repair bills out the wazoo, and loss of time and happy-joy-joy, I just said screw it and found Moon Moon on the AH for, gee, guess what? About the same amount as Momokawa and Matty had on had.

Anyway, I love Moon Moon - and plan on adding tales of him to my stack of stories. At least now I'll have a little more time than money, friend.