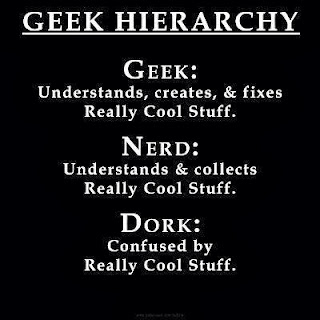 About two weeks ago while listening to my local public radio station, I heard an adverstisement of sorts for the GeekGirlCon here in Seattle. This sounds pretty awesome! From what I gathered, it's a response to some very negative things that must have gone down at the San Diego ComicCon, but like all well-intended events, it's not just looking to counter negative things, but to provide positive encouragement too. Okay, that sounds pretty good.

And what I am going to say next is truly just my wonderings, that's all. I was reading Apple Cider's blog the other day, and she was aghast at the portrayal of female war prisoners in Siege of Orgrimmar. Reading the subtext, it strikes me that she knows that World of Warcraft is a game about war, and that war is gruesome, and war contains atrocities, yet, I get the sense she wishes Azeroth was otherwise. I hadn't noticed the female prisoners, but noticed all manner of races crying, trapped, imprisoned, presumably tortured. Aysa Cloudsinger cries, and I am not familiar with her story, though another blogger is, Ysera.

As I mature (read: become a grumpy old lady), I find it really important to know when to keep score, and when to not. At my work, we look at data, which are designed to fit into nice little cubby Excel spread sheets of race, gender, economic status, and the like. What perplexes us are so many are pigeon-holed in two or more categories, and don't fit into any box at all. If you're dealing with bureaucratic systems, many times those color-in-the-lines moments meltdown like Crayons in the hot sun. Messy stuff, this.

Apple asks, genuinely, where is that line? I don't know anymore. But I do know there is death to go around in Azeroth:

So, I may go to GeekGirl. It'd be fun to see what's going on, though I myself don't want to be judged by the 20-30 somethings who think they invented feminism. See that chart on there? I am a dork when it comes to many things: a nerd when it comes to writing, and a full-on geek when it comes to understanding the desire to keep score. The playing field is built on a quagmire, and the change is constant.
Posted by Matty at 3:33 PM