The View from the Floor Diaries... 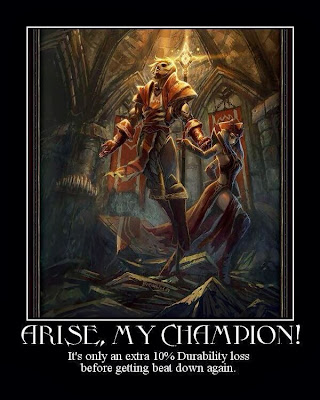 I swear sometimes Tome is reading and thinking about the same things I am - I was just catching up on Bear Big's post on old-yness and she did a mindful and reflective post on it. It's not so much the hand-eye coordination, although that does suffer some durability loss over time, it's the sheer amount of AWESOMESAUCEKNOWLEDGE that is stuck in our middle-earth life noggins that we trip over, too. We know too much. We've seen too much. And before we go off to Valhalla, we just want one more grand stand and get that damn bucket list DONE, suckers. We know how fast time goes by; those of us in our 40s onward have safely crossed over into the realms of "Seems like only yesterday," and "That movie is twenty years old?!" Even just this week I had plans to meet Akabeko at the GeekGirl Con. here in Seattle, and what do you know? Between work, Matty-shack responsibilities, and waiting for payday, the tickets were SOLD OUT as of Friday afternoon. Not. Cool. But we'll figure out another time, because I really do want to talk to her (interview) about her and Dahahka's collaborative writing (which I wholly admire and applaud). So, more to come about that later.

In the meantime, I've been using VEM: Voice Encounter Mods is a new add-on Krasher told me about, and I love it. It has a lovely lady with a soft British accent gently telling me I am a complete idiot, and in her Mary Poppin-esque pull-the-coat-rack-out-of-your-ass way, announces Foul Geyers, Ashen Walls, and in fooor, three, tu, woon,  counts down to my inevitable doom. I think it would be hilarious to have a blunt add-on that says, "Cheap ass, go reforge your shit," or, "You call that a lava lash? I know lava lamps with more aggression."

But I'm not sure there is an add-on for this problem: "When Playing Video Games Means Sitting On Life's Sidelines." All I can say is, this is one case where being older, and sometimes, wiser, may help. I have seen my share of addictions, and I myself dabble on the dark edges: it runs deep in my family, and although many addicts-turn-religious-fervor-twelve-dub-steppers I know would swear it's a black or white issue, I cannot help but see things in grey. Some of the comments I read claim that "everything" has been colored "addiction" lately, another pop-psychology term that uses a very broad brush to paint us all the color addict. The bottom line is: if you are not living a rich, well-rounded life, and have the capacity to reflect on when it's time to do something else or make a change, then whatever you're doing, or not doing, is the issue. The self-medication as a hobby is where things get dodgy. The levels of denial I have seen in family members is astounding, and truly suggests that our brains are our own devils: the depth of conceit, conniving, and conviction our inner voices use to manipulate us can be terrifying. Without going into details, I've seen it first hand. However, I can't help but think if I wanted to dip that big brush in a bucket of Shades of Addict (kind of a purple-brown color), I could make a case for "I'm addicted to Breaking Bad, reading the Game of Thrones series, eating nachos, doing laundry, playing WoW, (see what I did there? Oh clever, evil brain!), kissing, funky colored socks, haircuts, charging my phone, or bubble baths. What is the line, exactly, between habits, hobbies, and addiction? Is it an unrelenting force that becomes compulsory and without pleasure? Maybe that's it. When Azeroth ceases to become a pleasurable pass-time for me, when I feel that my presence is not supportive of my family, myself, or even my friends in Azeroth, then it'll be cold-turkey time. But--heaven help me--one thing I cannot give up is writing. If it leads to my downfall, my destruction, my doom, so be it. Instead of Satan, I'll say keep thee behind me, Finger-Waggers and Do-Gooders. Leave me to my keyboard and shut the hell up (so I say to no one in particular).

By the way, I've had nachos twice in four months, Breaking Bad is over, I am about to visit GRR Martin and pull his beard until he writes/finishes the next book, played WoW (badly) today but am on to other things, got my haircut yesterday, and had a few kisses here and there. All in a day's work.