Hey. You. Get off of my cloud. 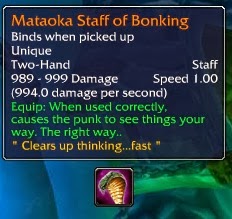 I hope you didn't miss Navimie's post on Ordo's loot, specifically the loot and treasures named after famous players, bloggers, WoW/Blizz folks.  Color me jealous! Wait, wait, wait...just a red-hot minute there, missy-green-envy-pants, I have the power of the INTERNET! (insert whooshing-wah-wah-wah sound here). And with this supreme power, I can be trolled on Facebook, defeat misconceptions, and create my own damn gear!

Damn, though, sometimes I really wish I could conjure up some amazing spells and magic to get folks to see things clearly. I must confess, yesterday I was defeated and discouraged by the aggragate of several minor incidences. When I think about it, though, when any of us get upset, it's when someone on this planet or the virtual one thinks their oxygen is more important than ours. Tome felt that way recently, and so did Navi. I myself woke up at 330 AM this morning stressing over things that happened at work and on Facebook yesterday, mainly several incidences where immature folks, ranging in ages from 12 to 62, told me their lives, opinions, right to drop the "F" bomb, right to sit where they want, right to throw pencils, right to own guns that (may) kill teachers and students, right to not pay taxes, right to fight and punch each other, right to smoke weed in public bathrooms, and the right to genuinely act like punks extraordinaire superceded my rights to do my job, enjoy the day, and be cool. Cause I am cool. (Or as Google translate would say, "culos extraordinarias."(Think I found the name of my next guild.) Oh, and this included days of inhabitants of the Matty-shack causing me undue stress, too. Awesome. Where's my damn Mataoka Robe of Pony-Drops, huh, Ordos? Whatever.

Well, I can tell you already today is one of those days I know a storm is going to hit me in the face, and I need to stay strong. But really, REALLY--don't feel like it. You all think I'm some tough extravert, but seriously, the introvert part of me really hates confrontation, or when others think their rights overwrite mine. Gets pretty damn old.

So, I'll take my metaphorical Staff of Bonking with me, and wield it as necessary. Results may vary.

Theme Song: Do Nothing. The Specials