Written and directed by... 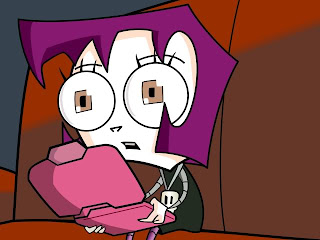 As some of my close friends and family know, I went to get my squiggly-spooch out yesterday. It required an overnight in a hospital, and from what the surgeon told me, apparently, I have screenshots! Hey! Guess what? Not going to post them. (I haven't even gutted up enough to see them...get it?)

So while I'm sitting here in a tiny haze of Vicodin and ginger-ale, wanted to share a few things, and will try not to over-share. But writer friends, if you're looking for that screenplay idea, I may be able to help you out. As long as you get me a cut on international and domestic gross distribution, and cast me in a cameo role, we have a deal.

The hospital is very much a typical large not urban, not suburban, but that quasi-area where city meets burbs and there is still a lot of traffic. There were several very old, very sick people around me, and it made me sad that they were in pain quite often, and I could set my watch by when they needed more meds. I also learned I have tiny veins, and my own IV would shift at the slightest movement, thus setting off an alarm, and I would have to call in the nurse to turn it off. Apparently hitting it with clogs is not cool. (Not sure how that is going to appear on the bill.) The other thing I learned is at this hospital, they pipe in the Brahms' Lullaby rift every time a baby is born. My mother asked the poignant question what do they do if there is a sad mom/baby story, which unfortunately does happen, and then I could tell she regretted asking me, but only because I didn't have an answer, and she knows once I start thinking about something...well.. In any case, I counted ten new little souls in 24 hours. There may have been more when I was asleep. Quite a fertile little bunch, all in all. Being in a hospital is a lot like camping, at least for me. All I want to do is go home and take a shower.

But here is where the screenplay idea comes in: when I was deep in my anesthesia in the post-op room, I dreamed I was in a real-time Azerothian style battleground, and then I wanted a puppy, and then I saw the "Release Spirit" button, hesitated on hitting it, but did, and woke up. There you go. A virtual after-life experience. Yea yea, I know that plot has been done a thousand times before. "It was all a dream" is in the rankings of horrible endings.

Should have known it was just a dream: next time I go on a vision-quest, I demand...a puppy.


PS Did I mention the Vicodin?

Email ThisBlogThis!Share to TwitterShare to FacebookShare to Pinterest
Labels: randomness