As Cymre put it, "living under a rock," I will say, yes, yes I was, and it was a lovely rock, with cool moss, and some grubs and worms, and all was happy. But someone stuck a big shovel under my rock and upturned the whole patch of dirt that I called home. The upheaval was epic. I spent the evening talking a few friends down from the ledge over lost spells, and including myself over totem changes - I'm not unhappy, it's just different, and is going to take some getting used to. But this isn't about grubs or soil - no, there is something far more sinister afoot in Azeroth!


But--did anyone else notice this? No one else seemed to--everyone, NPCS and players alike went about their business of changing key bindings and whatnot, but Luperci noticed it, and tried to alarm her fellow citizens (being the paladin that she is): The rats of Stormwind banded together and purchased shapeshifting spells and disguised themselves as CATS!

OH, the humanity! Oh, the felinity! Oh, the murinity! (No, that's not a word, and neither is 'felinity' Creative license priviliges, yo.) What the hell is going on here?!? 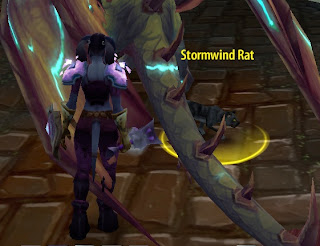 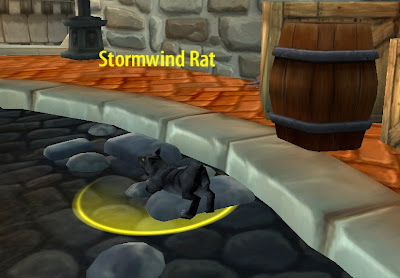 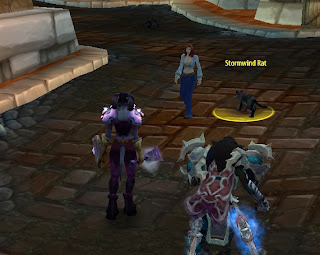 I have a sneaking suspicion somehow Mrs. Whitworth is involved in this, and Señor, I think Cat, is too.

They have also had a hand, er, paw in the missing #47 entrant photo - it was judged along with the other contestants, but the files have been misplaced...or so they claim.
Posted by Matty at 5:30 AM