I really enjoy writing this series, and this one, the big one, has been in the draft folder for some time. As with many drafts, they sit and simmer for awhile until they're ready. I had started this one out snarky, but some other shared words steered it in another direction. 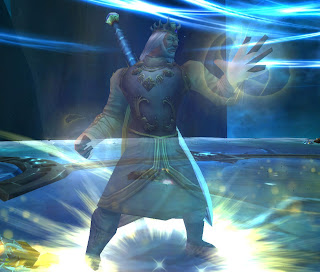 First, I'll define the Father figure as an archetype: Fathers can be loving, guiding, or scornful, but always strong and firm. Father's love is noted to be conditional, while mother's is unconditional. The relationship between father and son is particularly or extensively explored in the hero's journey, and 'atonement with the father' often accompanies the climax of the story in the resolution. Hamlet's relationship and mandate from a father's ghost, an unattainable phantom of resolution, drives him mad enough to everyone's tragic end. Romeo's and Juliet's defiance of parents, especially 'fathers' houses' doesn't really work out. And we all know about Luke, Peter Parker, Bruce Wayne, et al. Dead fathers who speak from the beyond influence their children forever. Gaining a father's love, moreover, respect, is a rite of passage for many a young man. In our Azerothian world, we have Uther, King Terenas, King Wyrnn, and Thrall is expecting his first, too.

A son's betrayal of a father cuts deep, and leaves world-wide scars:
I have mentioned before one of the most tragic stories is Fandral Staghelm's narrative. Driven mad by the loss of his son, Fandral seeks to destroy the world with his grief. To me, this was one of the most compelling and poignant stories written in Azeroth, and every time my shaman or paladin touch Leyara's Locket, it is not to turn into the 'enemy,' but remind my healer and protector there is a fine line between grief and healing.

But these are stories. We tell these stories again and again because they resonant deeply, and help us cope with our human condition.

I know many a young man right now who are about to become fathers for the first time. Some of these fathers are becoming so because of choice, and some with 'happy surprises.' I was thinking about all the  "How To" books for new parents, and they really seem to focus on mothers' responses to becoming a parent, and there are few lanterns to guide the path of fathers. Many (new) fathers fall back to the ways of their own fathers, and unfortunately, because of the lack of guidance, knowing what one 'should' do is lost among the teachings of fathers who don't know what to do. Many fathers in narratives are bumbling, cruel, and downright evil (thinking of Tywin Lannister). Within the past twenty-four hours, I heard two stories of a father who is the worst of all possible types of fathers, and then, a story about a father who I now consider to be---well, I am so humbled and honored to have been allowed to hear his story.

But this is serious stuff, and it sublime, and it is beautiful, and it is real. Navi sent this link written by Chris Pearson, and it hit hard. No one prepares any of us, no one can, for what they went through, for experiences of love and loss that we will all go through. Reading Chris's post late last night, I realized to myself, whatever comes my way, I am strong enough. I am strong enough. No, I am not in any imminent danger of loss, but I know parents who have experienced loss recently, and I have a lot in my life I do my damnedest to protect.

To fathers, new and more experienced: I have some guidelines for you:

Be good to your children's mother, whether you are still together or not. How you treat the woman who brought these gifts into your life will affect your sons and daughters forever. Be good to her, and be respectful. Even if it's tough.

Be consistent with your children. You are in the role of the boundary giver. Yes, it's fun to be 'another big kid,' and that's awesome. Play games, goof off, chill, relax, and as you are doing so, teach your sons and daughters "the rules" and why they apply. Don't put the mom of the house in the role of 'the heavy' all the time either.

Be smart: if your own father set less than a great example for you, do not let that be an excuse. I know of two stories where a man let his father's bad influence excuse his own poor choices, and another amazing man who considered his father's poor choices and become an incredible father in spite of them.

Be good to the man you are. You made it. You protect, provide, and have know-how and intelligence that the people in your life depend on: you are up to it. You are strong enough.

In these days of not only blurred gender-roles and confusion, it is liberating and confusing for all of us. Defining what it means to be "a man" through the guidance of fathers, or lack thereof, still holds some basic truths.