I am about to stop and go make myself a cocktail. Probably one like my grandmother used to drink, hell, maybe even Scotch, sans the Pall Malls and deep Southern drawl.

Why, Matty? Bad day. No, not at all. Spent WAY too much time worrying about Canada, and Australia, and my friends, and all the stuff I have to do, and then decided to shove it all over and try to get Heartichoke as far along to exalted with the Alliance Vanguard so she could buy her chopper schematics before the big pandas roll into town, among other real life events.

Maybe that is my problem: I try to delineate between real life and game life. It is a breathing human who sits here and multitasks and games, or hell, just games. This is the life. And I know I should more be thick-skinned when this exchange happens while I'm playing Luperci, Who Is Not A Fail Tank:

We were in Well of Eternity. That first boss, the big satyr-but-not-wiser guy, I offered to eat the eyeballs, all was fine, but right when he spawned again it was right on top of the healer and I mistyped and didn't get aggro fast enough, and she/he was one-shotted. I have never seen a shaman healer go down so fast. I got a bit "WTF TANK?" and I apologized and said my typing went awry. Note the word "awry." It is important for this next part.

Then, onward, everyone up, start the hallway trash on our way to Azshara, and I'll be damned! I'm dying! I had to use LOH on trash!?

So: I said this (notice I did not take the screenshot in instance) 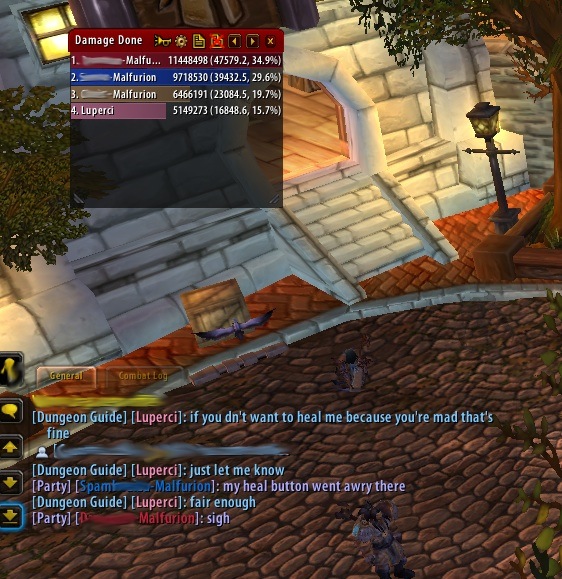 After this exchange I told them to "Have a nice day," and left the party. But note, I didn't do it immediately. I thought about it, and then asked myself, "What would Big Bear do?" A tip of the hat, and out he would go.

Now, the 'woman' part of me (or gee, just human nature?) thinks, "Damn them! They got a new tank, and no one died, and they think I suck! They are justified in their thinking, in their actions, and are rewarded for their bad behavior! But, alas, this is what we all live with now-- the outrageous and snotty are rewarded, hell, they even get their own TV shows.

Should I have made the mistake? No. Was there a solar flare, butter on my fingers, or stepped on a rock, and sun got in my eyes? Yes. But guess what, Troup Meanbutts from Malfurion: I am not paid major league dollars to make your dungeon experience flawless, anymore than you are paid big bucks to make my experience perfection. It is my job to know the fights, do the best I can, and anticipate as much as I can, which I do. What if I had a degenerative disease? What there was a phone call, or the dog barked? What if an asteroid hit my house? How about this: instead of assuming I am purposely trying to ruin your day, why don't you pull your head out of your ass and enjoy the view?

But Spam, my child, my blog is becoming full of the toxicity that players like you spew. I am going to make a promise to myself, and my friends: this is my last angry post for at least...a week. Okay. Two. Two weeks. No angry posts until September 1. And maybe by then, I won't have any.

In the meantime: Heartichoke is trying just to get some soup: